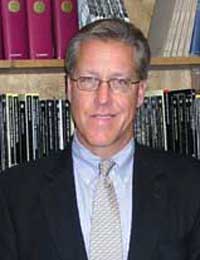 Dr. Jeffrey Hamilton, professor and chair of Baylor's department of history, has been selected for the 2011 Baylor Centennial Professor award, which will allow him to travel to England for research on Henry de Lacy, Third Earl of Lincoln and a confidant of Edward I.

Dr. Jeffrey Hamilton, professor and chair of Baylor's department of history, has been selected for the 2011 Baylor Centennial Professor award, which will allow him to travel to England for research on Henry de Lacy, Third Earl of Lincoln and a confidant of Edward I.

"I'm extremely grateful to the Centennial Class of 1945 for their generous support of the Centennial Professor award," Hamilton said. "This is a testament to the impact that both faculty and students have on each other in our shared educational enterprise."

Waco's access to specific archives concerning Henry de Lacy is limited. The grant will allow Hamilton to survey Britain's regional archives for manuscript sources, and also to travel to sites closely related with Lacy, such as Denbigh Castle in Wales and Lincoln's Inn in London.

Hamilton initially became interested in Lacy after 30 years of studying the reign of Edward II. Hamilton believes Lacy, a member of an earlier generation, was a "stabilizing influence" during a reign largely defined by conflict.

"He was likely central to political reforms associated with the reign as well," Hamilton said. "But because most of his career transpired in the reign of Edward I, a dominating figure in his own right, Henry de Lacy has received far less consideration than he deserves. An appreciation of his career can reveal a great deal about both the politics and social milieu of the late 13th and early 14th centuries in England."

Hamilton came to Baylor in 1995, originally attracted by the emphasis on undergraduate teaching and the opportunity to participate in study abroad programs. He has spent summers in England with Baylor in Great Britain and Baylor in Oxford, and has served as resident faculty director for Baylor in Maastricht. These programs helped him maintain relationships with British colleagues in his field, he said.

The Class of 1945 - the Baylor Centennial Class - established an endowment fund to support faculty development. Each year, a Baylor tenured faculty member is designated as the Centennial Professor and is provided with funds for a project that will facilitate the development of his or her ability to function as a university professor and contribute to academic life.