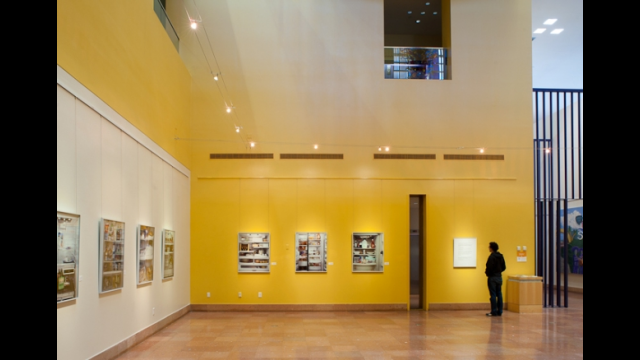 Mark Menjivar's "You Are What You Eat" photo exhibit at the San Antonio Public Library, 2011. (photo courtesy of markmenjivar.com)
Tweet
March 15, 2011

The exhibit is the featured event of the School's Open House from 5 to 7 p.m. March 16 at its new location at 811 Washington Ave. Dean Diana R. Garland, Baylor Provost Elizabeth Davis and City of Waco Mayor Jim Bush bring welcoming remarks at 5:30 p.m. The public is invited for the come-and-go event.

"You Are What You Eat" is a series of portraits made by photographing the interiors of refrigerators - "as is" - across the United States. Twenty of the series' 36 images will be on display for six weeks in the School's two-story, second-floor main lobby. The public is invited to visit the exhibit throughout its stay.

"It is a beautiful facility," Menjivar said, "and I would do anything for the school. It was during my education there that I developed my desire to focus on social issues."

Menjivar, a licensed social worker, runs an arts and advocacy project in partnership with Legal Aid,working with homeless youth in San Antonio.

"I will always be a social worker, but I am choosing to work through the arts now," he said.

"It is thrilling for us to have Mark's work as the centerpiece of our open house for the Baylor and Waco communities," said Dean Garland. "He represents how a social work education can be foundational for nontraditional as well as traditional careers that focus on bringing expression to social justice issues. We're very proud of him."

The exhibit has won several awards including Director's Choice in CENTER's Project competition and Photolucida's Critical Mass Top 50. It has been covered by NPR and the Smithsonian Magazine, among other major publications.

"These are portraits of the rich and the poor. Vegetarians, Republicans, members of the National Rifle Association, those left out, the under appreciated, former soldiers in Hitler's SS, dreamers, and many more. We never know the full story of one's life," Menjivar said.

The "You Are What You Eat" exhibit follows the debut of Menjivar's newest series at the Waco Art Center, through March. Titled "Salvador," the project documents the rural community of Valle Nuevo in El Salvador and the ongoing work of World Hunger Relief Inc. in that country.

The school moved from its Speight Avenue Plaza location on the Baylor campus in mid-December and welcomed its students in January for spring semester classes. With its faculty, staff, and baccalaureate and graduate students, close to 300 people are now using the renovated, three-story structure that most recently housed the Wells Fargo bank. The school resides in the center of many of the more than 100 nonprofit agencies and entities with which it already has long-standing relationships.

The Open House event begins at 5 p.m. in the second floor lobby of the school, with brief remarks and introductions beginning at 5:30 p.m. Tours of the facility and refreshments will be available.