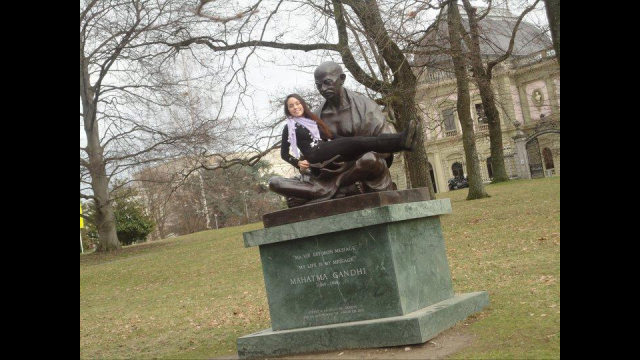 Baylor University graduate Daniella Romero, of Spring, Texas - seen here in Geneva, Switzerland - has been awarded a Rotary International Ambassadorial Scholarship, providing a grant of $30,000 for one academic year of study in another country and the title of Ambassador of Goodwill.
Tweet
Feb. 14, 2011

Baylor University graduate Daniella Romero, of Spring, Texas, has been awarded a Rotary International Ambassadorial Scholarship, providing a grant of $30,000 for one academic year of study in another country and the title of Ambassador of Goodwill.

Romero, who received the award Feb. 5, graduated in December with a bachelor's degree in international studies and minors in French, Spanish and public relations. With the scholarship, she plans to represent the United States and Rotary in Switzerland for the 2011-2012 academic year, while studying for her master's degree in international affairs.

"I had my final interview on Feb. 5," Romero said. "Although I was extremely nervous because of what this scholarship meant to me, a chance to get one step closer to my dream of making a difference, I knew that if this was meant to be for me, it would."

After leaving the interview feeling happy, Romero said she had not even made it home when she got a phone call from the scholarship committee, telling her she had been chosen as a scholarship recipient.

Romero said she learned of Rotary through her younger sister, Denise, who is a Rotary Youth Exchange Student in Belgium. Since her sister began her application, Romero and her mother got involved in Rotary.

"I instantly fell in love with their projects and their mission," Romero said. "Everything I have always believed in I found in Rotary: service, community, tolerance, unity, belief and passion to make this world a better place."

As a part of her Rotary duties, Romero will participate in service projects and give speeches and presentations across Europe, as well as engage in her own project.

"My area of focus is peace and conflict prevention and resolution," Romero said. "I plan on working with young students at local schools, as well as youth exchange students, to promote global awareness and cultural exchange."

At her interview, Romero said she received a paperweight in the shape of a globe that said, "Rotary, making a world of difference."

"This is exactly what I plan on doing with my new title as Ambassador of Goodwill: take all the tools and values of Rotary and start making a difference in anyway that I can," Romero said.

Romero, who speaks French, Spanish and English, attended a French school in Mexico until she moved to the United States at age 14. At Baylor, she was a member of the Honors College and the Baylor Interdisciplinary Core. She also was a part of Model Organization of American States and the Language Acquisition Center.

"I feel extremely honored to have received this scholarship, and I want to share it with all those amazing teachers, mentors, friends and role models that I have had the pleasure to meet and make part of my life," Romero said. "The positive impact they have had on me will continue to take effect as I take everything I have learned and everything I am to share with those that give me the honor of being part of their life."