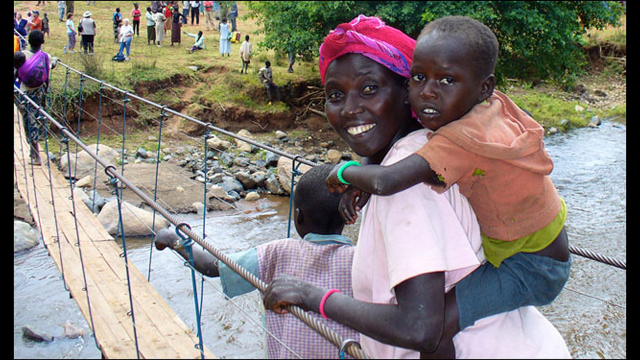 An engineer who has worked closely with Baylor University's School of Engineering and Computer Science to build pedestrian bridges in Africa has been named a CNN Top Ten Hero for 2010 and is now in the running for Hero of the Year.

Harmon Parker, founder and director of Bridging The Gap Africa, will receive $25,000 and will be honored at CNN Heroes: An All-Star Tribute, hosted by CNN anchor, Anderson Cooper that will air on Thanksgiving Day, Nov. 25, at 7 p.m., from the Shrine Auditorium in Los Angeles.

In 2006, Parker and a team of Baylor engineering students partnered to build a 130-foot-long pedestrian bridge over a river that divides a community in West Pokot, Kenya, for most of the year. The bridge saved the villagers more than 2.4 million miles of walking as they traveled to the market, schools and medical care. At the dedication of the bridge, Parker was able to share in Swahili that the bridge was a gift from God, and that the team was just God's means to bring it to them. Dr. Walter Bradley, Distinguished Professor of Mechanical Engineering at Baylor, led the Baylor engineering team to the successful completion of the project while in Kenya.

"Harmon is a hero not just because he does wonderful things to serve the poor but because he takes significant personal risks in this service and has on many occasions had to pay a significant price for his service," Bradley said. "For faculty and students, one cannot go to a remote location in an under-developed country and not have your heart broken by the incredible hardships with which the people live. It is an unforgettable experience that will permanently cause all of us to be more generous in giving of our time to help people in such countries."

As a Christian developmental worker in Africa over the last twenty years, Parker has gained an understanding of the culture and needs of marginalized communities in Kenya that has led him to a unique and valuable role in offering them hope so that lives will be saved through his bridge building efforts. His most notable contribution came when he saw the dangerous river crossings they make on a daily basis to attend schools, markets, health clinics and to visit family in other villages. He built his first bridge in 1996. As the demand for more bridges grew, he created "Bridging the Gap" in 2003 to construct footbridges that keep these people, especially children, women and the elderly, out of these treacherous waters. Over the past thirteen years, he has built more than 45 footbridges in Kenya.

Parker was raised in Kentucky, and married his wife Teri in 1984. Their 23 year-old son, Josh, recently graduated from Azusa Pacific University with a degree in sociology and has returned to Africa to work with a relief organization in southern Sudan. Teri, a native of San Jose, CA, is Bridging the Gap's Kenya Office Manager. The Parkers have lived in Kenya for the past 19 years.

Anyone can vote for Parker as often as they wish until 6 a.m. on Nov. 18. If you wish to vote, click here.