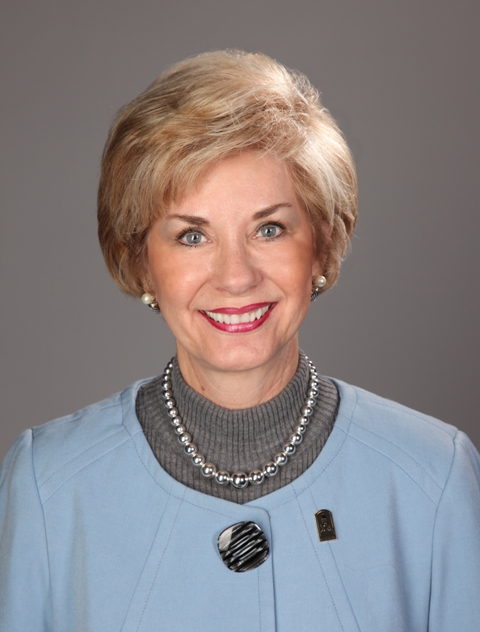 Baylor University President Ken Starr today announced the appointment of Tommye Lou Davis, associate dean of the Honors College, associate professor of classics and Master Teacher, to his executive council as vice president for constituent engagement, effective at the start of the spring semester.

At the direction of Baylor Regents, the administration has created a strategic, comprehensive and effective university-based alumni relations effort to better engage and serve Baylor alumni worldwide. As Starr's vice president for constituent engagement, Davis will help ensure the effective integration of these efforts, and provide oversight to the university's other most important outreach efforts. Davis will have responsibility for the Baylor Network, The Parents League and the Office of Government Relations.

"I am immensely pleased to appoint Tommye Lou Davis to this new position as we continue our efforts to meaningfully connect with all members of the Baylor family," Starr said. "Tommye Lou is a skilled communicator who, in her 35-year career at Baylor, has taught, mentored and befriended thousands of Baylor students who are now faithful and generously supportive alumni. She is a tireless advocate who, during the Bush library effort and elsewhere, has demonstrated a steadfast dedication to Baylor. We are fortunate to have as remarkably competent and extraordinarily talented an individual as Tommye Lou to step into this important position."

"I am excited and humbled by this opportunity to serve Baylor University as a member of President Starr's executive council," Davis said. "As associate dean in the Honors College for the past three years, I have enjoyed reaching out to students, parents, friends and alumni in order to share and promote the outstanding work of my colleagues and our students. I am energized by this wonderful opportunity to expand those efforts to include representing Baylor to alumni worldwide. I am grateful to President Starr for his confidence in me, and I look forward to engaging alumni and friends around the globe who love Baylor and want to maintain a meaningful connection to our university."

Davis earned her bachelor's degree from Baylor in 1966 and a master's degree in educational psychology in 1968. She has taught Latin to Baylor students since joining the faculty in 1966. She was appointed assistant professor with tenure in 1972 and was designated Master Teacher and associate professor in 1993. She served as acting chair of the Classics department in 2002.

Davis has served as a member of the Faculty Senate and on the board of directors for the Baylor Alumni Association. She served on the Faculty Athletics Council for 12 years and as chair for three years. She is a longtime member of the Baylor Round Table and Baylor Bear Foundation.

Actively involved in student life, Davis has served for 22 years as faculty adviser for Kappa Kappa Gamma sorority and was selected the Outstanding Adviser on Campus in 1996 and again in 2010. She also served for several years as the adviser for Alpha Chi Honor Society. In 2008, she served on the search committee for the Vice President for Student Life.

As a faculty member, Davis is a member of the American Philological Association, the Classical Association of the Middle West and South, and the Texas Classical Association. She has received numerous awards for outstanding teaching and service, including the Moon Mullins Award for Meritorious Service (1994), Kay Mueller Award for Community Service, Mortar Board Circle of Achievement (2002) and the Outstanding Professor by the Baylor Women's League for 2001-02. She has been a finalist a number of times for the prestigious Collins Award, which honors the outstanding faculty member chosen by Baylor's senior class.

From 2000-2003, Davis served on the Bush Presidential Library Committee, chairing the Museum Planning Committee. In 2003, she was appointed Chief of Staff to the President and assumed overall responsibility as chair of Baylor's presidential library efforts. As the director of the Bush Library Project, she spoke to hundreds of groups around the state, as well as Baylor groups in Arkansas and Washington, D.C., touting the positive aspects of Waco and Baylor. Davis founded the Community Task Force for the Bush Library Project, which brought community officials and leaders together to seek various means of enhancing the quality of life for residents of central Texas and bolster the bid for the presidential library. In 2005, Davis made the presentation to the White House on behalf of Baylor. In 2007, she was awarded the Difference Maker Award for Economic Development by the Waco Tribune-Herald due to her Bush Library Project efforts. Before returning to the classics department and the Honors College as associate dean in 2007, Davis served as Chief of Staff to the Chancellor.

Throughout her life as a Waco resident, Davis has been involved in community affairs. She presently serves on the Waco Mammoth Foundation Board and the Community Visioning Coordinating Committee. She also serves on the boards of the Texas Ranger Hall of Fame and Museum and CORD Communications. A former president of the Junior League of Waco, she served as the sustaining member on the board of directors in 2008. Her involvement in civic affairs has included the Waco Music Theatre board, Waco Symphony Council, the Lyric Opera, Keep Waco Beautiful Commission, Waco Art Center Associates, Waco Cotton Palace Pageant Board and Historic Waco Foundation, where she served as a past General Chairman for Christmas on the Brazos.