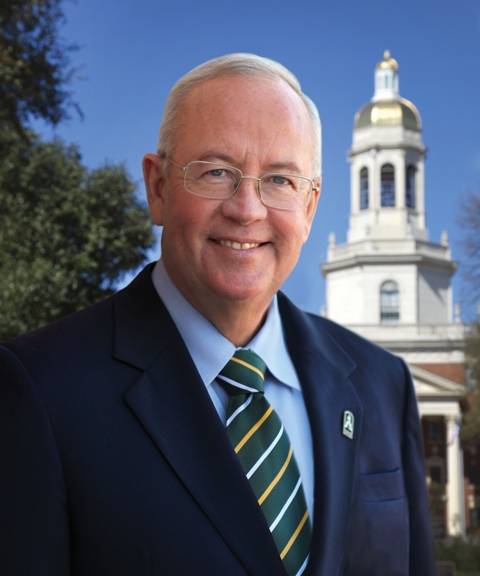 Judge Kenneth Winston Starr will be installed as only the 14th president in Baylor University's 165-year history in a public ceremony at 2 p.m. Friday, Sept. 17 in the Ferrell Center. The Constitution Day ceremony will be the highlight of a week featuring academic, commemorative and community events relating to the inauguration.

Subsequent break-out sessions are scheduled from 11:30 a.m. to 1 p.m. "Packing Heat and the Second Amendment" will be held in the Kronzer Appellate Advocacy Courtroom at Baylor Law School. "Immigration in America - Who's Really in Charge" will be held in the SBC Theater, Jeanes Discovery Center, Mayborn Museum Complex.

The installation ceremony will begin at 2 p.m. in the Ferrell Center. Keynote speaker for the inauguration ceremony will be Stephen L. Carter, The William Nelson Cromwell Professor of Law at Yale Law School, who will speak on "The Future of Democratic Debate." Carter is a New York Times best-selling fiction author and the author of dozens of articles in law reviews and many opinion columns in the nation's leading newspapers and periodicals, including Christianity Today.

Starr also will speak, delivering his Inaugural Response. Following the installation ceremony, the public will have the chance to meet President and Mrs. Starr at a reception on the Ferrell Center grounds.

Immediately prior to coming to Baylor, Starr served six years as The Duane and Kelly Roberts Dean and Professor of Law at Pepperdine University. He was elected Baylor's president in a unanimous vote of the Board of Regents Feb. 12, 2010, and took office June 1.

Since he began serving as Baylor president, Starr has kept a busy schedule that has included negotiating Baylor's future in the Big 12 Conference, meeting alumni and students across the United States and joining incoming students at Baylor Line Camp ceremonies in Independence.

On Sept. 15, Starr announced his first fundraising priority: a $100 million scholarship fundraising initiative officially titled How Extraordinary the Stories: The President's Scholarship Initiative. Later that evening, Starr hosted a student dinner on the grounds outside the Bill Daniel Student Center.

For complete information on inauguration activities at Baylor, visit www.baylor.edu/inauguration.