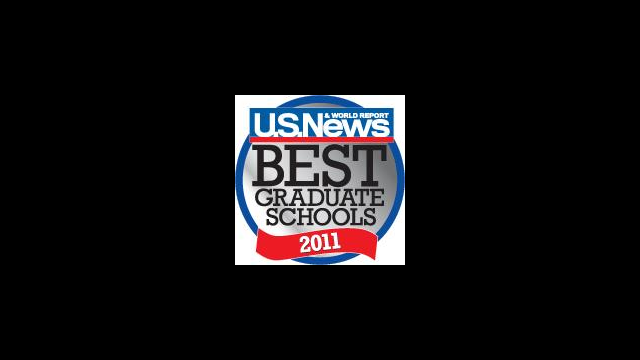 Baylor University graduate programs in business, law, the sciences, education and health disciplines were among those nationally ranked in the 2011 edition of "America's Best Graduate Schools," which are available in the May 2010 edition of U.S.News & World Report magazine.

Each year, U.S. News ranks professional-school programs in business, education, engineering, law and medicine. These rankings are based on two types of data: expert opinions about program quality and statistical indicators that measure the quality of a school's faculty, research and students. These data come from surveys of more than 1,200 programs and some 12,400 academics and professionals that were conducted in fall 2009.

Baylor's Hankamer School of Business moved up 11 places to No. 52 among the 99 top-rated master's programs in business accredited by AACSB International. In all, 433 MBA programs were surveyed in fall 2009 and early 2010, with the survey methodology focusing on quality assessment by peers and recruiters, placement success and student selectivity.

"We have made significant strides in our career management program that has impacted the rate of employment for our MBA graduates," said Dr. Gary Carini, associate dean of graduate business programs at Baylor's Hankamer School of Business. "We have developed a series of career development courses designed to help students secure rewarding internships and full-time jobs in the career area of choice. This, coupled with the success in our healthcare administration specialization, has helped us attain our highest ranking ever this year."

Baylor's graduate program in entrepreneurship also was ranked by U.S. News at No. 31, tied with the University of Louisville.

Baylor Law School was ranked No. 64 overall in the magazine's "Top 100 Schools" listing for 2011, along with Lewis and Clark College and the University of Kentucky. In the law specialties rankings, Baylor's trial advocacy program rose to fourth best in the nation.

"The real test of a law school's trial advocacy program is the breadth and quality of instruction provided to the entire student body, not just the select few who are chosen for interscholastic teams. Baylor is committed to providing the best trial advocacy training possible to every single student enrolled," said Baylor Law Dean Brad Toben. "It is gratifying to see that its national reputation is beginning to catch up with that longstanding reality."

The rankings of 188 law schools fully accredited by the American Bar Association are based on a weighted average of 12 measures of quality, including quality assessments by deans, faculty, lawyers and judges; selectivity; and placement success. Data were collected in the fall 2009 and early 2010. Specialty rankings are based solely on nominations by legal educators at peer institutions.

Baylor graduate programs in the sciences are also featured in several newly ranked U.S. News categories. Rankings of doctoral programs in the sciences are based on the results of surveys sent to academics in biological sciences, chemistry, computer science, earth sciences, mathematics, physics and statistics during fall 2009. Baylor doctoral programs were ranked in several categories, including:

The universe of schools surveyed in these categories consisted of schools that awarded at least five doctoral degrees for the years from 2003 through 2008, according to the National Science Foundation report "Science and Engineering Doctorate Awards."

Baylor's School of Education jumped 31 places to No. 74 among the top 279 graduate programs that grant doctoral degrees in education. The schools were surveyed in fall 2009 and early 2010. Rankings are based on a weighted average of the 10 quality measures, such as assessment by peers and superintendents nationwide, student selectivity, faculty resources and research activity.

Several Baylor graduate programs in the health disciplines continue to be highly rated by U.S. News, although their categories were not re-ranked this year.

The Baylor-U.S. Army programs are operated at the Academy of Health Sciences at Fort Sam Houston in San Antonio.

The university's speech-language pathology program, which was ranked 62nd in the nation in 2004, moved up to 60th in 2008, along with 11 other universities

U.S. News ranked the master's degree program in nursing at Baylor's Louise Herrington School of Nursing in Dallas, as 72nd best in the country in 2007, tied with 22 other programs.

Baylor's doctoral program in clinical psychology (PsyD) was tied for 83rd in 2008 along with eight other universities.

Highlights of the graduate school rankings are scheduled for publication in the May 2010 issue of U.S.