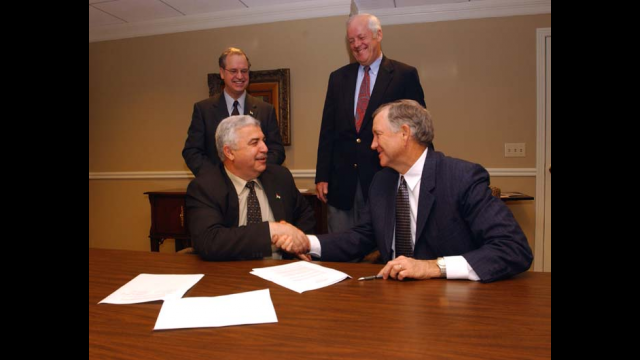 Dr. Asmat and Dr. Sloan shake hands after signing an extension of the partnership between Baylor and Dohuk universities originating in 1996. Bill Mitchell, Director of the Center for International Education and David L. Jeffery, Provost and Vice President for Academic Affairs, look on.
Tweet
April 22, 2004

A majority of Iraqi citizens welcome the American presence in their country, according to Dr. Asmat Khalid, president of Dohuk University in northern Iraq. Asmat, who received his doctorate in geotechnical engineering from Bolton Institute in the United Kingdom, spoke to a crowd of approximately 100 Baylor students, faculty and guests on April 21 about the need for educational reform in Iraqi universities after the repressive years of Saddam Hussein. His lecture was part of the Global Issues Lecture Series, sponsored by the Council for International Education.

In his remarks on "Higher Education in Iraq: Looking to the Future," Asmat recounted that Iraq, one of the wealthiest Middle Eastern countries, was known as a higher education center before Saddam's rule, but that the "long embargo" of access to worldwide intellectual activity, along with the emigration of Iraqi talent, stifled the nation's universities. The Baathist party, led by Saddam, rose to power in 1992.

To reform Iraqi higher education, Asmat recommended revamping the entire infrastructure of the university system and incorporating updated educational methodologies. He expressed confidence that Iraq would be able to recover quickly.

"We could use outside help, but it would not have to be for a long period of time. Iraq is a rich country, and in the near future, it will be able to help itself," he said.

He also expressed hope that qualified Iraqis would return to their homeland to help with rebuilding, saying that more than 150 Iraqi medical doctors practice in London alone.

During the rule of Saddam's Baathist party, the sciences were supported educationally more than humanities since scientific fields were more useful militarily, and the educator hopes to see more emphasis in humanities. He envisions a new college of humanities and democratic studies, encompassing political science, mass communications, social science, comparative religions and history, to guide citizens toward democratization.

Asmat told of progressive attitudes in the Kurdistan region where Dohuk is located. Education is a high priority among Kurds, with a 43 percent female student body at Dohuk University. Religious tolerance is accepted in northern Iraq because of the multi-cultural make-up of Kurdistan. Other regions of the country are not as open, he said.

Dohuk University was established in 1992, founded by Asmat, when Saddam excluded Kurds from attending other Iraqi universities. In the 12 years of the university's existence, it has grown from two colleges, agriculture and engineering, to 10, including schools of medicine and law. Dohuk University is a member of the International Association of Universities, the General Medical Council of the United Kingdom and other international accreditation groups.