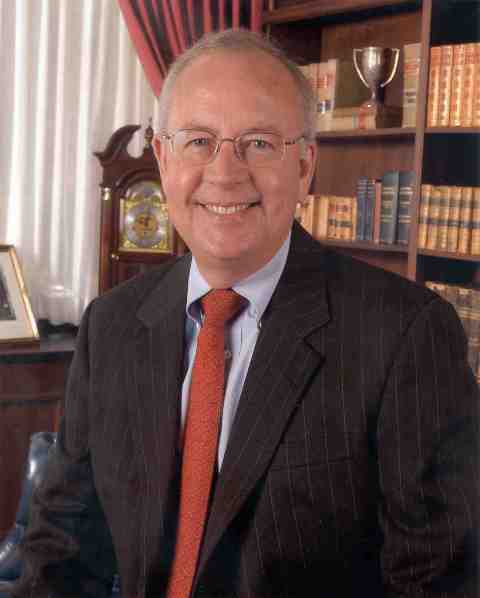 Baylor University announces that Kenneth Winston Starr, J.D., current dean of the School of Law at Pepperdine University, has been named the 14th president of Baylor University. Starr was the unanimous choice of both the 14-member Presidential Search Committee and the 10-member Presidential Search Advisory Committee, and was elected unanimously by the Baylor Board of Regents on Feb. 12.

Starr will be introduced to the campus community by Regents Chair R. Dary Stone, J.D. '77, at a university-wide meeting in the Bill Daniel Student Center on the Baylor campus at 3 p.m. Tuesday, Feb. 16.

"We are delighted to announce the appointment of Judge Ken Starr as the 14th president of Baylor University," Stone said. "His depth of experience and exceptional record as a university dean and legal scholar, his dedication to the highest ideals of the Christian faith, and his profound commitment to public service and visionary leadership make him the ideal person to lead Baylor at this remarkable time in the university's history."

Regent Joseph B. Armes, BBA '83, MBA '84, who chaired the Presidential Search Committee, also praised Starr. "During the course of our conversations, it became clear to both committees that Dean Starr's success at Pepperdine Law School was driven by his commitment to the highest standards of academic excellence and that he would apply that same commitment to achieving Baylor's aspirations for scholarship and teaching," Armes said. "A comprehensive national search process has produced a fifth generation Texan who, throughout his distinguished career in law, the academy and public service, has been an articulate advocate for Christian ideals in the public square."

"Judge Ken Starr brings to this task an uncommon understanding of Baylor's unique and distinct mission as a national Christian university with historic Baptist ties. He represents the very best of what it means to be an active churchman who, along with his wife Alice, puts his belief into action," said Dr. Kenneth L. Hall, chair of the Presidential Search Advisory Committee and CEO of Buckner International.

Starr said he respects Baylor's history as he looks forward to its future. "With its great tradition in the Christian world and its growing international reputation as a research university that continues to care deeply about undergraduate education, Baylor is poised to have an increasingly expanding global impact," Starr said. "With the goals of educational excellence and Christian commitment remaining firmly before us, I count it a great blessing and honored responsibility to commit my talents and strengths to stand alongside the Baylor Family in writing the next chapter in this university's storied history."

With a distinguished career in education, the law and public service, Starr has served since 2004 as the Duane and Kelly Roberts Dean and Professor of Law at Pepperdine University. He also is of counsel to the law firm of Kirkland & Ellis LLP, where he was a partner from 1993 to 2004, specializing in appellate work, antitrust, federal courts, federal jurisdiction and constitutional law.

As Solicitor General of the United States from 1989 to 1993, Starr argued 25 cases before the U.S. Supreme Court. He also served as United States Circuit Judge for the District of Columbia Circuit from 1981 to 1983, as law clerk to Chief Justice Warren E. Burger from 1975 to 1977 and as law clerk to Fifth Circuit Judge David W. Dyer from 1973 to 1974. Starr was appointed to serve as Independent Counsel for five investigations, including Whitewater, from 1994 to 1999.

He is the author of more than 25 publications, and his book, First Among Equals: The Supreme Court in American Life, published in 2002, was praised by U.S. Circuit Judge David B. Sentelle as "eminently readable and informative...not just the best treatment to-date of the Court after (Chief Justice Earl) Warren, it is likely to have that distinction for a long, long time."

Starr succeeds David E. Garland, who has served as interim president of Baylor University since August 2008 and who will continue in the role he has maintained as dean of George W. Truett Theological Seminary.