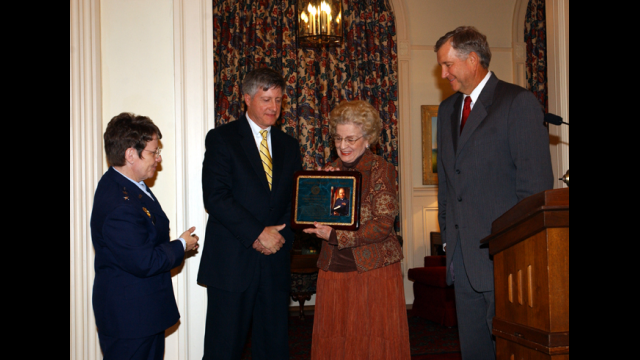 Baylor can count among its thousands of alumni many who could be termed heroes -- from missionaries who served in dangerous locations to members of the armed forces who served in defense of the U.S.

The late Robert P. Taylor, who served in World War II and later became the third Chief of Chaplains for the U.S. Air Force, recently was singled out by his alma mater as one of those alumni who showed undaunting courage and received posthumously the inaugural Chaplain Robert P. Taylor Award honoring Baylor War Heroes. Accepting the award were his widow, Mildred, and his son, Robert Taylor Jr.

Graduating from Baylor in 1933, Taylor served as regimental chaplain of the 31st Infantry Regiment, Philippine Division, arriving in Manila in May 1941. With the declaration of war, the Philippine Division was transferred to the front lines on the Peninsula of Bataan. Taylor was cited for bravery and awarded the Silver Star for gallantry in action for his services in the Battle of Bataan.

At the surrender of the American forces there, he became a member of that part of the Bataan "Death March." He served as chaplain in the prison camp hospital at Cabanatuan where he ministered to more than 10,000 patients. In the summer of 1944, he spent 14 weeks in solitary confinement for smuggling food and medicine to the patients. He was later taken to Japan and Manchuria on one of the infamous "hellships" which was bombed twice by American planes with a loss of more than a thousand lives.

Air Force Chief of Chaplains Lorraine Potter, who spoke at the award ceremony, recounted Taylor's words when he was released from the "heat box" after many weeks of torture and spoke to his fellow prisoners.

"As he came out, he saw it as an opportunity to rekindle the spirit of his fellow Christians," said Maj. Gen. Potter. "So weak that he was leaning on bamboo sticks, he said, 'If you could turn me inside out and look at my heart, you would see a man who still believes in the power of God. I'm going to live and you are too, because God is going to give us strength. Now bow your heads in prayer.'

"Chaplain Taylor is a visible reminder of the presence of God to those in the service," she added. "He personifies the best of service to our country. He developed a shepherd's heart for those serving in the military."

Taylor's name will be added to the Ring of Honor that currently is inscribed with the names of Baylor's two Congressional Medal of Honor winners, John "Killer" Kane and Jack Lummus.