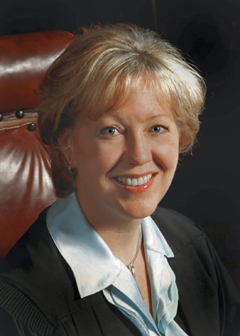 The Honorable Harriet ONeill, Justice on the Supreme Court of Texas

The Honorable Harriet O'Neill, Justice on the Supreme Court of Texas, will be the keynote speaker at Baylor Baylor Law School's commencement ceremonies at 10 a.m. Saturday, May 2, at Waco Hall. Sixty-six students will receive juris doctor degrees.

Additionally, Dylan Tyler Springmann, the highest ranking student in the graduating class, will deliver student remarks. Baylor Interim President David Garland and Dr. Elizabeth Davis, interim provost and professor of accounting, also will participate in the program and will help award degrees to the graduates.

Justice O'Neill was elected to the Texas Supreme Court in 1998 and re-elected to a second term in 2004. Her judicial career began in 1992, when she was elected to the 152nd District Court in Houston. In 1995, Gov. George W. Bush appointed her to the 14th Court of Appeals, and she won election to that seat in 1996. Justice O'Neill left the court of appeals with a 91 percent approval rating (1998 Houston Bar Poll), the highest rating on her nine-member court.

In the 10 years before assuming the bench, Justice O'Neill practiced law in Houston, concentrating primarily in complex business and commercial litigation. She practiced with the firms of Porter & Clements and Morris & Campbell, then opened her own office when she decided to devote most of her time to mediating legal disputes.

Justice O'Neill graduated in 1982 from the University of South Carolina School of Law, where she was a member of the academic honors society and served as the law school representative to the American Bar Association. She returned in the spring of 2002 as the law school's "Jurist in Residence," and subsequently received the University of South Carolina Distinguished Alumnae Award. Justice O'Neill earned her undergraduate degree, with honors, from Converse College, and studied at University College in Oxford, England. In 2001, Converse awarded Justice O'Neill an honorary doctorate degree.

Justice O'Neill is a frequent author and speaker. In 2001, she was the First-Prize Winner in the National Law Day Speech Awards for her speech titled "Protecting the Best Interests of Our Children." She also writes and lectures frequently for continuing legal education programs. In 2002, and again in 2006, the Texas Association of Civil Trial and Appellate Specialists named Justice O'Neill the Appellate Justice of the Year. She is a member of the American Law Institute, the Robert W. Calvert Inns of Court, and a Fellow of the Houston and Texas Bar Foundations. Justice O'Neill is an active member of the Texas Access to Justice Commission, which the Supreme Court created to develop and implement initiatives designed to ensure that the court system is available to meet the basic civil legal needs of low-income Texans.

Justice O'Neill was appointed by then-U.S. Attorney General Alberto R. Gonzales to serve on the National Advisory Council on Violence Against Women. She has a special interest in improving our court system for children and families in foster care and spearheaded the creation in 2007 of the Permanent Judicial Commission for Children, Youth and Families, of which she is chair.

Justice O'Neill and her husband, Kerry Cammack, have three children who are actively involved in sports and school activities. For many years, Justice O'Neill coached her daughters' basketball teams. They are members of Good Shepherd Episcopal Church in Austin.