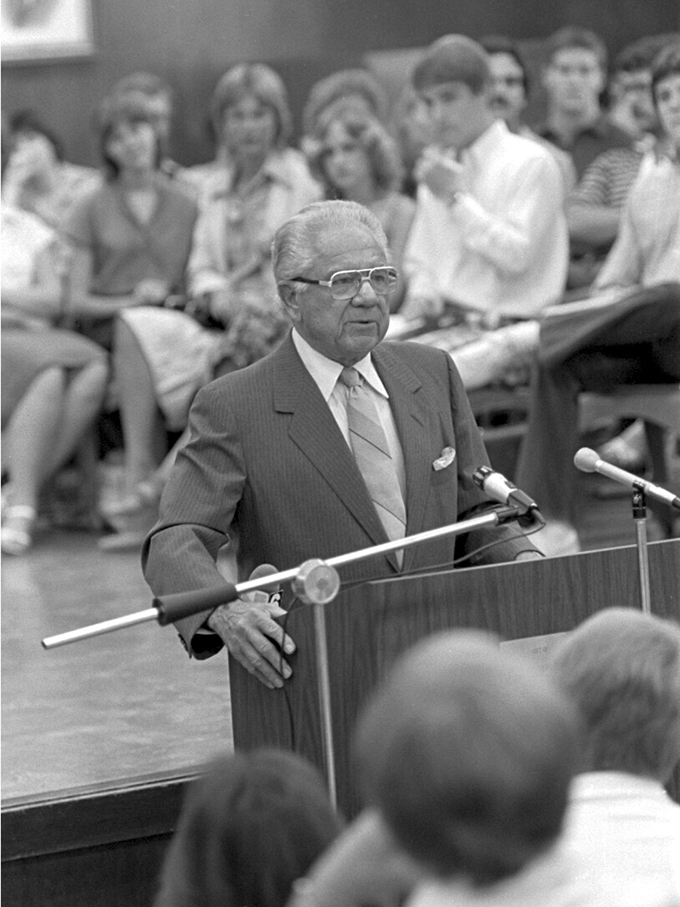 Leon Jaworski spoke on "The Lawyer in Society" in a September 1980 lecture series to Baylor law students.

Next month will mark the 30th anniversary of the date Leon Jaworski, Baylor law graduate and Waco native, began to unravel the tangled Watergate web that eventually toppled an American president. Jaworski carved his place in history on Nov. 1, 1973, when he was appointed the Watergate Special Prosecutor. Nine months later, on Aug. 9, 1974, America's 37th president, Richard M. Nixon, resigned.

The Watergate saga started June 17, 1972, when five men, dressed in suits, broke into the headquarters of the Democratic National Committee on the sixth floor of the Watergate Hotel in Washington, D.C. The resulting investigation had millions of Americans glued to their television set as the drama, with its cast of high-profile players, unfolded daily and reached all the way up to the White House.

Ultimately, a total of 25 people were jailed for their roles in the bungled break-in or the cover-up attempt.

Historians of the day claimed Nixon escaped impeachment by resigning and avoiding indictment through a pardon granted on Sept. 8, 1974, by his successor, President Gerald R. Ford.

Jaworski, the talented Texan lawyer destined to play a leading part in the Watergate investigation, had humble beginnings in the legal profession. Born in Waco on Sept. 19, 1905, the son of Polish and Austrian immigrant parents, he received his law degree from Baylor Law School in 1925 and at the age of 20, he was the youngest lawyer ever licensed in Texas. He "cut" his legal teeth during those early days with a Waco law firm by defending bootleggers during the Prohibition era.

But Jaworski became so skilled as a courtroom lawyer that he was soon hired by a prestigious Houston law firm and later became a managing partner of Fulbright & Jaworski, one of the nation's largest law firms. Jaworski became a leader in the legal profession and held the presidencies of the American Bar Association, the American College of Trial Lawyers and the State Bar of Texas.

In addition to private practice, he served in the United States Army Judge Advocate General's Department during World War II and was made Chief of the War Crimes Trials Section of the U.S. Army during the late stages of the war in Europe. He personally prosecuted the first major war crimes trial in the European Theater.

From March 18, 1976, to Nov. 5, 1982, Jaworski was interviewed as a project of the Baylor University Program for Oral History by its then-director, Dr. Thomas L. Charlton, professor of history, and Professor W. Frank Newton, who was then serving as associate dean and law professor on the Baylor law faculty. During the course of 18 video and audiotaped interviews conducted at locations in Houston and the Baylor campus, Jaworski recalled in some detail memories of his childhood and education in Waco, his career as a lawyer, his wartime service and his role as the Watergate Special Prosecutor.

The Texas Collection at Baylor also holds a substantial collection of Jaworski's papers and letters that trace his distinguished career in the legal profession and his service as the Watergate Special Prosecutor. The bound volumes of transcripts of the videotaped interviews with Jaworski also are kept at The Texas Collection and contain his comments on many aspects of the Watergate investigation, including references to "Deep Throat," the gap of 18-and-a-half minutes in the White House tape recordings, and his reaction to the pardon granted to Nixon by President Ford.

Asked during one interview how important the Watergate investigation was in his overall legal career, Jaworski replied that Watergate was the "most important single event in my professional career." Later, while admitting that "I'm naïve in some respects, still," Jaworski said he went up to Washington "not believing that Nixon was involved." He said he had always had a great regard and esteem for the presidency.

Jaworski also was asked what his advice would have been to Nixon had he found himself "on the other side," in the role of Nixon's counselor. He replied that if had he heard the White House tape recordings, "I would have gone to Mr. Nixon and said: 'Mr. President, the best thing that you can do is resign. The best thing you can do is say to the nation that you're sorry for what has happened here, for what you have done, and resign.' That would have been the advice I would have given him."

In another response, Jaworski said he believed there was such a figure as Deep Throat. He said, "I think it was somebody who was trying to cover his own tracks in the White House and wanted to make sure that he wasn't going to be under suspicion. But I think that Deep Throat's part in this whole matter has been dramatized beyond what the facts really are."

One letter in the papers held by The Texas Collection was sent to Jaworski by a Harlingen, Texas, woman who asked for his autograph for her granddaughter, because she believed that his name would be recorded in history. Writing to the granddaughter with a copy of his signature, Jaworski noted, "If my name appears in future history books, as you believe, I hope they will show that our task force accomplished honorably all that the Congress of the United States charged it to do."

Charlton, who now serves as the acting director of The Texas Collection, says that some of the Jaworski papers are still sealed until a future date, but many items are available for examination, including the seven-bound volumes containing the interview transcripts. Charlton said the interviews, which were conducted over a total of 33 hours, prompted Jaworski to donate his entire collection of papers concerning all of his activities to the university. The entire Jaworski collection occupies more than 125 linear feet at The Texas Collection.

Jaworski maintained close links with his alma mater, and his easy, gracious manner made him an instant "hit" with Baylor law students whenever he visited the school. He presented a number of lectures there over the years, including a six-part lecture series he delivered in September 1980 on "The Lawyer in Society." Two years later, on Dec. 9, 1982, Jaworski died at the age of 77 after suffering a heart attack during a visit to his country home in Wimberly, near Austin. The 440-acre Wimberly ranch was where Jaworski wrote his best-selling book, The Right and the Power, which gave a blow-by-blow account of the Watergate affair.

Today, the man who played a major role in helping to restore America's faith in its system of justice and the rule of law, is memorialized at Baylor Law School by the Leon Jaworski Center, a major component of the Sheila and Walter Umphrey Law Center, and by the Leon Jaworski Office, a recreation of Jaworski's original Houston office, containing his desk and other furniture and personal artifacts. The items were donated to Baylor Law School by Jaworski's family and by the Fulbright & Jaworski law firm.

Visitors wishing to research the Jaworski material are required to make an appointment with the archives division of The Texas Collection by calling (254) 710-1268 or sending an e-mail to TXCOLL@baylor.edu.

An abstract of the Jaworski interview material can be found HERE.