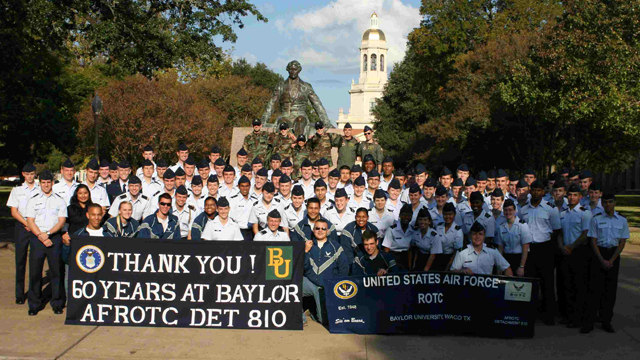 Adding another achievement to its long history as one of the nation's oldest Air Force ROTC units, Baylor University's Air Force Reserve Office Training Corps (ROTC) Detachment 810 has been named the No. 1 large detachment in the nation, beating out 144 detachments nationwide for the top spot.

"I am very proud of our detachment and we could not have achieved this without the close partnership and support we enjoy from Baylor," said Col. Danny L. Leonard, commander of Baylor's AFROTC and chair of the department of aerospace studies. "These cadets do not belong to AFROTC Detachment 810. They are Baylor's progeny who will serve in the world's best Air Force."

A panel of judges looked at seven different criteria during the competition, including production, education, recruiting and retention, university and public relations, cadet activities, Arnold Air Society activities and other notable achievements.

"We have cadets who run their fraternities, cadets who serve in leadership positions in student government and the Baylor Chamber of Commerce, cadets who host high school drill meets on campus, and cadets who serve as color guard at a number of local events," Col. Leonard said. "Our program is cadet-led and cadet-centric. Each semester, they determine what events to support and the depths of that support."

Detachment 810 was formed in 1948, only 10 months after the creation of the Air Force as a separate military branch, making it one of the first ROTC programs in the nation. This year, the detachment is enjoying increased success after being named the No. 1 large detachment in the Southwest Region, among detachments with more than 100 cadets.