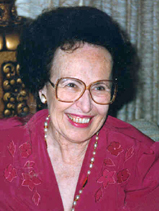 The Rev. Gregg Ligon and Mr. Chester Springfield officiated. The committal services followed at the Clover Hill Cemetery in Lott under the direction of OakCrest Funeral Home of Waco.

A 1942 graduate of Texas Woman's University in Denton, she completed her master's degree from TWU in 1945 and her doctorate in information systems from Texas A&M University in 1976.

Dr. Ligon joined the Baylor University faculty in 1958, serving as an assistant professor from 1958-60, associate professor from 1961-75, and a full professor from 1976 to the present. She was still scheduled to teach a graduate class this fall. Dr. Ligon was named Emeritus Professor in 1997, and during the Fall 1998 Commencement, she received a special Tribute for Meritorious Service from President Robert B. Sloan Jr.

She distinguished herself by being an individual of firsts. As the first person in computing at Baylor University and among the first in the state, Dr. Ligon made many unique contributions to the field of information systems. In 1962, Carl and Thelma Casey gave the Hankamer School of Business an IBM 1620 computer, and Dr. Ligon was chosen to learn how to run the computer and then teach students in the computer field. Then computers were relatively new and very few universities had computers or taught computer courses. Under her guidance, student workers wrote and ran programs using keypunch cards. Soon thereafter, she began her doctoral studies at Texas A&M, commuting to College Station while still teaching a full load at Baylor. When she received her doctorate, she became one of the three first recipients of such a degree from Texas A&M.

"Helen was always enthusiastic. She had a bubbling personality," said Dr. G.W. Willis, chair of the information systems department. "Helen and I went through the PhD program at Texas A&M together. She would sit in the classes during the day and take notes using shorthand, then at night she would type them out. The next day, she would hand them out to all of us students. She got quite a few of us through that PhD program at A&M."

Throughout the 45 years she has been at Baylor, Dr. Ligon consistently maintained very high student evaluations, and was named Most Popular Business Professor an unprecedented six times. She constantly worked with large corporations to help students find summer internships and jobs after graduation.

Dr. Reagan Ramsower, dean of libraries and Baylor's chief information officer, was one of Dr. Ligon's students while an undergraduate at Baylor in the 1970s.

"Helen was a great teacher, a master teacher-- one of those teachers who taught thousands of students and remembered each one's name," Ramsower said during the eulogy he delivered at Dr. Ligon's funeral service. "Helen wasn't so interested that you learned facts. She wanted you to learn something that would help you in your career and on the job. Helen was one of those teachers that was so excited about her field that it excited even the most cynical of students."

Dr. Ligon pioneered partnerships with the consulting divisions of the large accounting firms allowing her classes to be team taught with experienced professional consultants. She presented at many national conferences and published in many major journals. Her dissertation was published in book form and was required reading many years for graduate students nationwide.

"[In the mid-70s] Almost the entire IS field was researching why many implementations of information systems were failing and not delivering the hoped for outcomes," Ramsower said. "But what topic did Helen choose? She wrote her dissertation and later published a renowned book called 'Successful Management Information Systems.' Helen, the eternal optimist, believed we could learn how to avoid the pitfalls and problems attendant to implementing computer systems by focusing on the successes, not the failures. She was decades ahead of business researchers on this idea."

In 1991, Dr. Ligon was awarded the prestigious Herbert H. Reynolds Award, which recognizes outstanding dedication and service to Baylor University. Although officially retired in 1993, she refused to attend the ceremony or take her retirement award and continued to teach a "lighter load" of classes. In 1992, her colleagues and former students honored her by establishing the Helen H. Ligon Professorship in Information Systems. At business school alumni gatherings, Dr. Ligon's name is always the first one mentioned by grateful graduates.

Dr. Ligon enjoyed a wonderful working relationship with her colleagues, who respected her professionally and personally. They could always enter her office for a dose of enthusiasm - and a handful of jellybeans.

An avid Baylor sports fan, she attended as many home games as possible and proudly cheered her Bears onward.

Dr. Ligon served as past president of Delta Kappa Gamma honorary teacher's organization. She received the Pathfinder Award from the Waco YWCA in 1983. She has been active in both the First Presbyterian Church of Lott and the Clover Hill Cemetery Society of Lott.

She was preceded in death by her parents and by her husband in 1983.

Her family is pure green and gold. Her uncle, Bob Hailey, was a member of the Immortal Ten. She was instrumental in seeing that her son and grandsons all graduated from Baylor, as did her daughter-in-law, Diane. Dr. Ligon was very proud that in 1997, she and her family were recognized as Baylor's Family of the Year during the Homecoming game that year.

In the first history of Hankamer School of Business published in 1990, it was written that "Enthusiasm should be Helen Ligon's middle name. After teaching at Baylor all these years, students still clamor to enroll in her classes. Why? Because of her enthusiasm for life and her commitment to staying abreast of the latest developments in information technology. Those of us whose lives are touched by Helen Ligon both love and respect her and feel richly blessed to have the privilege of knowing her."

Memorials may be made to the Helen H. Ligon Professorship in Information Systems, PO Box 8005, Waco, TX 76798.

Friends, colleagues and former students can view an online scrapbook and send remembrances to the family at a special website established by OakCrest Funeral Home.