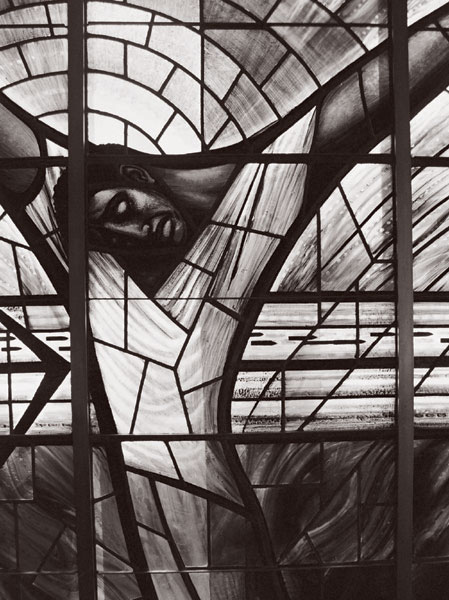 This window in the 16th Street Baptist Church was designed by Welsh artist, John Petts, in repsonse to the bombing. In a letter Petts wrote in 1965 to the pastor of the church, he states: "In the face of the huge world problem of intolerance, the denial of human rights, hatred, violence of man against man, color-bars and segregation, the simple words of Christ stand out: 'You do it to me...'". Photo by Clark Baker.

On Sept. 15, 1963, four girls were killed when the Ku Klux Klan bombed an Alabama church. Forty years after that tragic event, Baylor professor Gaynor Yancey is bringing to a new generation of students the lessons she learned in revisiting that turbulent era. Her research includes interviews with three women whose lives were forever changed by that violence. Baylor Magazine sent writer Carol Dawson to Alabama to follow up on the lives of these women -- plus another, the fifth victim of the church bombing, "the one nobody ever talks about."

In June 2001, Dr. Gaynor Yancey of Baylor's School of Social Work went on a pilgrimage into what she thought would be the past. The recipient of a Lilly Foundation Fellowship awarded to eight academics and ministers, Dr. Yancey traveled to Samford University in Birmingham, Ala., where she was immersed for four weeks in the archives of the 1950s and 1960s Deep South through a seminar titled "Spirituality and Social Justice: Lessons Learned from the Civil Rights Movement."

The pilgrimage sites were part of a preplanned agenda that, at first glance, wore all the musty sanctity of old news. The participants were scheduled to travel from one protest location to another, tutored by men and women who had once, long ago, tasted violence and prejudice firsthand. They would visit the Birmingham Civil Rights Institute, Kelly Ingram Park, the Rosa Parks Museum, the National Voting Rights Museum and Institute and Selma's notorious Edmund Pettus Bridge -- the site of the Bloody Sunday eruption on March 7, 1965. Then, they would confer at each week's end about the contemporary pertinence, if any, of these shrines to a decades-old vision of freedom.

"I didn't have a clue what that would mean," says Dr. Yancey, assistant professor of social work and director of the baccalaureate social work program. "I only knew that I'd be going back and looking at something through adult eyes that I'd only seen through a child's and teenager's eyes in the past. That was what was so intriguing to me. I wanted to see what had changed, if anything, as a result of the Civil Rights Movement. I wondered what impact the movement had on other people's lives."

Born in England and reared in Pittsburgh and Houston, Dr. Yancey had spent 30 years of her life working with inner-city minorities in Philadelphia, coming to Baylor in 1999 as a faculty member. When the notice advertising the Samford Fellowship came through campus mail, she instantly knew she would apply.

"I knew my whole life had been influenced by the Civil Rights Movement -- particularly the two areas of racial and socioeconomic justice," she says. "I've spent my entire adult life committed to working with populations that were at risk, oppressed and discriminated against. I didn't know whether I'd see that anything had really changed from when I'd been young."

One of Dr. Yancey's strongest memories is of an incident that took place when she was 8 years old. While visiting her father's hometown of Hope, Ark., she accompanied her parents to the town's central square to sell her grandfather's watermelons. It was a hot, dry day, and when she spotted a public water fountain, she ran over to it. A black boy drinking from the water fountain stopped her: "You can't drink out of that fountain," he said. "It's for Negroes." For Dr. Yancey, that incident on the town square was the beginning of a lifelong quest to make sense of the differences, she says.

"Making sense of the differences resulted in focusing on the areas of commonalities and building on those strengths," Dr. Yancey says. "It meant looking closely at the African American spiritual experience, not only in church, but also in leadership. It meant gaining a deeper understanding of how God's love could be shown to all people -- even among those who were practicing violence against you."

Two years ago, preparing for her month in Alabama, Dr. Yancey wondered if the old vision of freedom still resonated. The Jim Crow laws were dismantled now, shredded by the movement's consequences. She already was acutely aware of the movement's chronicles; she had grown to adulthood during its most vital years. Because of what had happened back then, conditions now had changed enough to let dust settle on this well-documented period and permit newer forms of progress to emerge. One could pay one's respects, salute the courage of those pioneers, examine the fruits of their labors through the lens of retrospect and move on.

But when Dr. Yancey reached Alabama, she discovered there was nothing obsolete in the education she was about to receive. What she found there far exceeded her previous emotional, intellectual and spiritual horizons. In fact, it altered her permanently. One of her guides on this journey -- Carolyn McKinstry -- was a woman who was in the 16th Street Baptist Church in Birmingham when the Ku Klux Klan bombed it. Two other women, -- Cleopatra Kennedy and Joanne Bland -- both jailed for civil disobedience during the movement, were part of the cadre of young people who joined the marches for equal rights. From these women, Dr. Yancey learned that it's not where you bury your past that matters, but how you use it to craft your present and future. The fourth woman featured in this article is someone Dr. Yancey didn't have the opportunity to meet during her Alabama sojourn. This woman -- Sarah Collins Rudolph -- was so shattered by the events described here that her story only just now is beginning to emerge.

On that beautiful late-summer morning, the bomb that would wake up a dozing nation exploded at 10:22 at the east entrance of the 16th Street Baptist Church in Birmingham. Following months of mass meetings, nonviolent protests and angry policemen attacking demonstrators with frenzied German Shepherd dogs and fire hoses, the congregation felt reasonably secure as they stepped into what was, in the most literal sense, their sanctuary. It was the church's first official Youth Day, honoring the young people who'd recently poured onto the streets to become the surprise revolutionary strong arm of the movement. They were enthusiastic schoolchildren who wished to grow up voting without hindrance, who longed for decent, integrated educational opportunities, who didn't want to tolerate the lynchings, castrations and torture their parents and grandparents had suffered. In the previous months, they had been marching, singing freedom songs, getting arrested and being stuffed, en masse, 40 or more, into jail cells.

Between Sunday School and the worship service, the KKK's 11 sticks of dynamite planted beneath the east steps of the church demolished part of the basement and killed four young girls who'd been in the women's restroom lounge grooming themselves for their first stints as Youth Day ushers. The blast, so fierce it blew the white dresses and patent-leather shoes off their seared bodies while crushing their heads with masonry chunks, would become the boom that finally would catapult the Civil Rights Movement into the hearts and minds of Americans everywhere. The four girls who died that day were Addie Mae Collins, Carole Robertson, Cynthia Wesley, all 14, and Denise McNair, 11.