Baylor Hosts Noted Entrepreneurs, Philanthropists and Authors on Global Poverty at Symposium on Faith and Culture 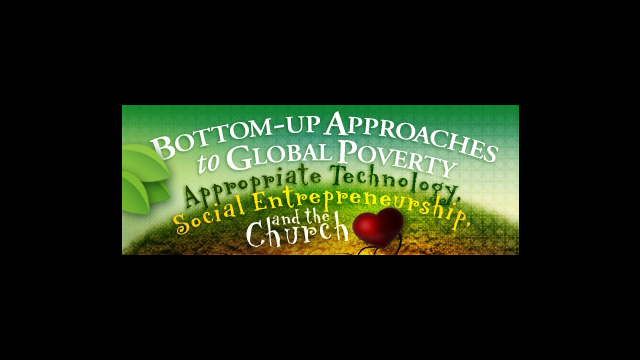 Baylor University will host more than 80 presentations at the second annual Symposium on Faith and Culture, which this year will focus on "Bottom-up Approaches to Global Poverty: Appropriate Technology, Social Entrepreneurship and the Church." The symposium will be held Thursday, Oct. 23, through Saturday, Oct. 25, in the Cashion Academic Center of Baylor's Hankamer School of Business. The symposium is sponsored by the Institute for Faith and Learning at Baylor.

The symposium focuses on three forces: the local church, appropriate technology and social entrepreneurship, which hold enormous promise when they converge and have the potential of creating genuine social change and expressing Christian faith and witness.

"A number of programs and initiatives that focus on poverty are now under way at Baylor, and this interest informed the theme of the symposium," said Dr. Darin H. Davis, interim director of the Institute for Faith and Learning at Baylor. "Grounded in the practices of the local church, such an approach to poverty is not from the top down, but from the bottom up.

"This year's symposium, drawing on the contributions of engineers, economists, entrepreneurs, missionaries and theologians, will explore how Christians are called in unique ways to respond to the poor. We hope those in attendance will learn that advances in technology and business present unprecedented opportunities to help the poor," he said.

Global poverty is one of the most pressing challenges of our time, Davis said. More than three billion people live on less than two and a half dollars a day and more than 1.4 billion live in extreme poverty, he added.

"While we must reflect on questions of technical know-how when we consider ways to alleviate poverty, Christians also must ask whether such efforts are truly ministering to those in need in ways that express genuine faith and witness. This year's symposium seeks to address both of these concerns," Davis said.

Featured speakers at the Symposium on Faith and Culture, include:

BERNARD AMADEI, professor of civil engineering at the University of Colorado at Boulder. His current interests include sustainability, green construction and international development. He is currently working on a book titled Engineering with Soul.

CHRISTOPHER BARRETT, international professor of applied economics and management and co-director of the African Food Security and Natural Resources Management Program at Cornell University. He has written 10 books and more than 170 journal articles and book chapters. He serves as editor of the American Journal of Agricultural Economics and is past president of the Association of Christian Economists.

KEN ELDRED, CEO of Living Stones Foundation Charitable Trust and chairman of the board of advisors of Parakletos @ Ventures. A pioneer in the kingdom business movement, he is the author of the acclaimed God Is at Work (2005) and the co-editor of On Kingdom Business: Transforming Missions Through Entrepreneurial Strategies (2003). He was named by Forbes as the most successful venture firm three years in a row.

J. ANDREW KIRK, former Dean and Head of the School of Mission and World Christianity at Selly Oak Colleges. With degrees from the University of London and Cambridge, he is the author of 13 books, including The Mission of Theology and Theology as Mission (1997), What is Mission?: Theological Explorations (1999), and Mission under Scrutiny: Confronting Current Challenges (2006).

PERLA MANAPOL, specializes in international community development and renewable energy and has worked for the past six years as president of a multi-awarded Philippine NGO, Sustainable Rural Enterprise (SRE), which operates and manages a coconut coir processing enterprise that provides livelihood for more than 700 families of poor coconut farmers. She is the author of two books and does private consulting on renewable energy-based assignments including the productive uses of renewable energy and alternative fuels.

CAESAR MOLEBATSI, chairperson of Empowa Investments and pastor emeritus of Ebenezer Evangelical Church in Dobsonville, Soweto. A champion of social justice and empowerment in South Africa, he is familiar to many South Africans for his work on SABC TV's, "In Search for Common Ground" and "Two Way," and for the radio program "PM Live." In addition, he is currently the Director of Youth Alive Development Foundation and is the author of A Flame for Justice (1991).

DWIGHT NORDSTROM, chairman of Pacific Resources International (PRI), a U.S. manufacturing-holding company that does consulting and engineering for start-up and expansion of manufacturing in China. PRI is a "GCC" (Great Commission Company) that has strategic alliances and/or spiritual accountability relationships with missionary agencies. He is the co-author of a book on business as missions and the author of numerous articles in leading business and Christian periodicals.

RAY NORMAN, dean of the School of Mathematics, Engineering and Business at Messiah College. For 15 years, he was engaged in research and applied development work in Africa and the Middle East with various academic and international development organizations. In the late 1990s he joined World Vision International and served as national director in the Islamic Republic of Mauritania.

BILL O'BRIEN, missionary with field service in Indonesia, executive vice president of the Foreign Mission Board (SBC) and founding director of the Global Center at Samford University. A past president of the American Society of Missiology, he is currently co-director of BellMitra Associates. He is the co-author of Choosing a Future for U.S. Missions (1998) and the author of Challenges Confronting Baptist Missions (2003).

PAUL POLAK, founder of International Development Enterprises (IDE), an international nonprofit poverty alleviation organization. Since 1981, IDE has pioneered the development and marketing of affordable income enhancing technologies within developing countries. In 2004, the Technology Museum of Innovation named IDE a laureate for its development of "Easy-Drip," an affordable micro-irrigation system. In 2003, Polak was named one of Scientific American's top 50 innovators for his work in market-based poverty alleviation. He also received Ernst & Young's "2004 Entrepreneur of the Year" award in the social responsibility category.

GLENN WHITE, director of Businesstry Concepts LLC, an organization dedicated to providing resources and training to bring economic, cultural, relational, and spiritual transformation to individuals in every nation. As president of Businesstry Concepts, he has worked on developing projects in Central Africa, the South Pacific, Fiji, Russia, Mexico and several other nations. He also serves as sales director for Pearl Technologies LLC.

For more information or to register, visit the web site for the Institute for Faith and Learning at Baylor at https://www.baylor.edu/ifl or call (254) 710-4805.