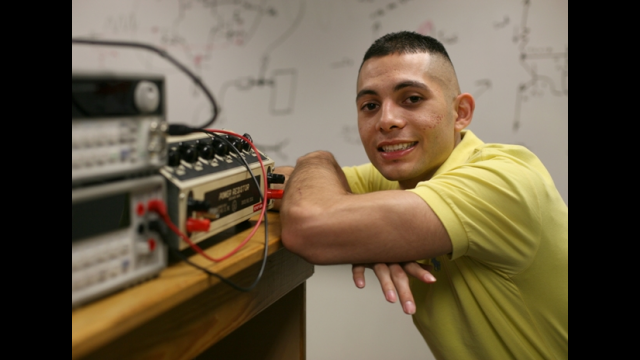 Baylor University senior Juan Yaquian, an electrical and computer engineering student from Temple, Texas, has been awarded the Barry M. Goldwater Scholarship, the premier undergraduate award in the United States and its territories in the fields of mathematics, the natural sciences and engineering.

Yaquian was one of 321 recipients selected on the basis of academic merit from a field of more than 1,000 math, science and engineering students. The Goldwater Scholarship will provide for the cost of tuition, fees, books, room and board, up to $7,500 for one year.

"Juan has tremendous creativity about his studies and research and a great work ethic," said Dr. Ann Rushing, professor of biology at Baylor, who chairs the university's Goldwater Scholarship committee. "He was very careful and attentive to the details of completing his application materials - no doubt this is the way he approaches his studies and life as well."

"I feel that I have been blessed just to have the opportunity to attend college because a college education was never guaranteed to me, so I never forget to thank the Lord for everything I accomplish in college and in life," Yaquian said.

Already immersed in research as a Baylor undergraduate, Yaquian hopes to continue his studies in electronic design and signal processing at a national laboratory or in a university setting. He is set to graduate from Baylor in May 2009.

In 2007, he participated in the Summer Undergraduate Program in Engineering Research at Berkeley (SUPERB), a program at the University of California-Berkeley that offers a group of talented undergraduate engineering students - who have been historically underrepresented in the field - the opportunity to gain research experience.

This summer, he will gain additional research experience as an intern at the Massachusetts Institute of Technology (MIT).

"Juan Yaquian is a rare intellectual jewel of a student," said Dr. Robert Marks, Distinguished Professor of Engineering at Baylor and one of Yaquian's mentors. "His soft-spokenness and humility are wonderful attributes often not characteristic of such genius. He has shown that, given a chance, great things can be accomplished by those from humble backgrounds. Remember the name Juan Yaquian. He is going to accomplish great things for society and our Lord."

The journey to Juan Yaquian's educational achievements has been anything but easy.

Abandoned by his father at age 9, Yaquian stayed with relatives in San Antonio, while his mother and siblings moved from their Corpus Christi home to Temple. At 14, he was reunited with his family and started high school. His mother worked multiple jobs to support the family. She also returned to college.

That often left Yaquian to his own devices. "I fell into the wrong hands and was bound to fulfill the stereotype handed to others like me," he said.

However, he was determined to find the right path and make something of his life.

He excelled in his studies. His brilliance and work ethic caught the attention of his teachers, who were persistent in "begging" Yaquian to seek a college education.

"They saw my potential, and it was their unceasing support coupled with my mother's strength and perseverance that encouraged me to continue to work hard," he said.

His senior year at Temple High School, Yaquian was rewarded with the Gates Millennium Scholarship, which assists outstanding minority students with significant financial need and high academic and leadership promise to reach their highest potential - in this case, providing the means for Yaquian to obtain his Ph.D. in engineering.

For his undergraduate studies, Yaquian chose Baylor, close enough to his mother in Temple, yet far enough away from the troubled path he left behind. He also wanted a university that would enable him to grow intellectually and spiritually, as he pursued his engineering degree.

"In choosing a major, I knew I wanted to develop skills in which I could solve problems I saw in society," he said. "As a strong believer of the motto, 'To whom much has been given, of them, much is expected,' I believe it is my responsibility to serve my community."

An Engineer On A Mission

Already Yaquian has traveled to Honduras with Baylor's Engineers with a Mission, a Christian organization for engineering students who feel called to serve developing communities with their technical skills. While on the mission-oriented trip, Yaquian helped engineers install a micro-hydro electric generator for a small village, providing electricity for the first time.

Beyond Baylor, Yaquian's ultimate - and lofty - engineering goal is to develop technology to benefit society as whole. Already he sees himself pursuing research that eventually will improve the ability of microwave imaging - a safer alternative to current imaging modalities - to detect cancerous tumors.

Learning he had been selected for the Goldwater Scholarship, Yaquian said his first thought was "Thank you Lord!"

He then sought his professors and other mentors at Baylor.

"I wanted to personally thank all the people who provided support during the application process, especially all the professors in the engineering department who have been instrumental in stimulating my interest in research," he said.

The Barry M. Goldwater Scholarship and Excellence in Education Program was established by Congress in 1986 to honor the late Sen. Barry M. Goldwater, who served his country for 56 years as a soldier and statesman, including 30 years of service in the U.S. Senate.

The purpose of the Foundation is to provide a continuing source of highly qualified scientists, mathematicians and engineers by awarding scholarships to college students who intend to pursue careers in these fields.

In its 20-year history, the Foundation has awarded more than 5,500 scholarships worth approximately $54 million.

For more information about the Goldwater Scholarship and Foundation, visit www.act.org/goldwater.