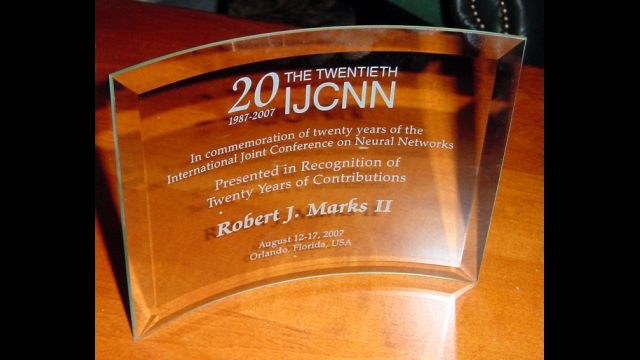 Robert J. Marks II, Distinguished Professor of Electrical and Computer Engineering at Baylor University, was recently honored as a "pioneer in the field of neural networks" at the International Joint Conference on Neural Networks, one of the premier conferences in the field of neural networks. Marks was among eight others recognized for their contributions at this year's conference, held in Orlando, Fla.

"Being honored by your peers is always a gratifying experience," Marks said.

Working in the area of computational intelligence and neural networks for more than 20 years, Marks said the two largest impacts of neural networks on society are fraud detection and power load forecasting.

"Working with Mohamed El-Sharkawi at the University of Washington, we were the first to suggest neural networks could be used by power companies to estimate how much power they would have to deliver the next day," Marks said. "Currently, nearly every power company in the world uses neural networks to make these forecasts."

Marks received his doctorate in electrical engineering from Texas Tech University. He came to Baylor from the University of Washington, where he was professor of electrical engineering and was graduate program director from 1996 until 2000. He is a fellow of the Optical Society of America IEEE. He has been recognized as an IEEE Distinguished Lecturer and has received the IEEE Centennial Medal and Certificate.