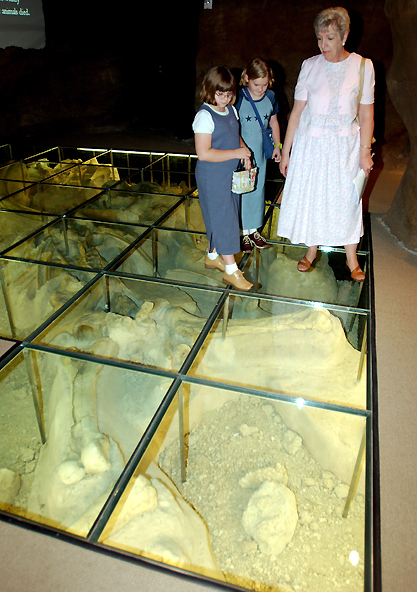 Diana Kohler, pre-nursing program coordinator at the Louise Herrington School of Nursing, and her granddaughters, Kaci and Becky, tour the Waco Mammoth Experience exhibit, where visitors can see casts of Columbian mammoth bones displayed exactly as they were unearthed at the Waco Mammoth Site, just five miles from the Baylor campus.

Following a two-year Waco Mammoth Site Special Resource Study, National Park Service leadership has indicated their support of the study's findings that the site does meet the NPS criteria for significance, suitability and feasibility for inclusion in the park system, according to Michelle D'Arcy, who has headed up the study. This opens the door for phase two of the study effort, which will analyze a range of management options, moving the site one step closer to a designation under the National Park Service umbrella.

"The rare discoveries at the Waco Mammoth site highlight Texas' rich natural history," said U.S. Sen. Kay Bailey Hutchison. "I am pleased that the National Park Service has recognized the importance of preserving this site."

"The site's historical significance, educational value and potential for tourism make it an excellent choice to include in the National Park System," said U.S. Sen. John Cornyn. "I'm encouraged that the process is moving forward, and I will continue to strongly support its selection."

This comes as excellent news for the Waco Mammoth Foundation, whose board has been working with the City of Waco and Baylor University to make necessary improvements at the site so that it can eventually be open to the public. Through a Save America's Treasures grant, matched by funding from Baylor, Waco and private donations, plans are progressing to preserve and protect the site, provide for the facilitation of continuing research, promote understanding and stewardship of the site through interpretive and educational opportunities, and provide opportunities for the public to experience, understand and enjoy the site.

To date, a total of 25 Columbian mammoths have been found at the site, thought to be the largest concentration of mammoths in the world to die from a single event. Investigation of the site began in 1978, when the first bones were discovered. The number of mammoths found in that one location has received national and international attention, with archeologists and paleontologists from across the United States and as far away as Sweden and Great Britain visiting the site to aid in the investigation and to do associated research. One of the most recent investigations, using a new technique for dating paleontological sites, has provided a more accurate age of approximately 68,000 years for the mammoths, much earlier than previously thought. Ongoing research is seeking additional information on the environment in which the mammoths lived and an explanation of how they died.

Since the site was first discovered, it has captured the imagination of central Texans. However, due to the delicate nature of the site and the lack of accessibility and visitor amenities, the site has never been open to the public on a regular basis. The public currently is able to enjoy seeing a re-creation of the site at Baylor's Mayborn Museum Complex. The Mayborn's Waco Mammoth exhibit allows guests to walk on a glass floor, where underneath they can see casts of the Columbian mammoth bones displayed exactly as they were unearthed, just five miles from the Baylor campus.

However, an important step forward with National Park Service has drawn excitement from those who have worked hard to realize the dream of opening the site.

"This news is a welcome step toward our goal of completing the mammoth site dream," said Don Moes, chairman of the Waco Mammoth Foundation Board. "It is the culmination of many hours of work by the National Park Service, civic organizations, the City of Waco and Baylor University. By working together we continue to move forward toward reaching our final goal of opening the mammoth site for citizens of the United States and especially the citizens of the State of Texas."

"The City of Waco is thrilled to be a part of this exciting opportunity to properly protect this unique treasure found in our community," said Waco Mayor Virginia DuPuy. "The announcement by the National Park Service to be a partner with the city along with Baylor University, raises the level of expectation for the project to become an outstanding educational and visitor attraction."