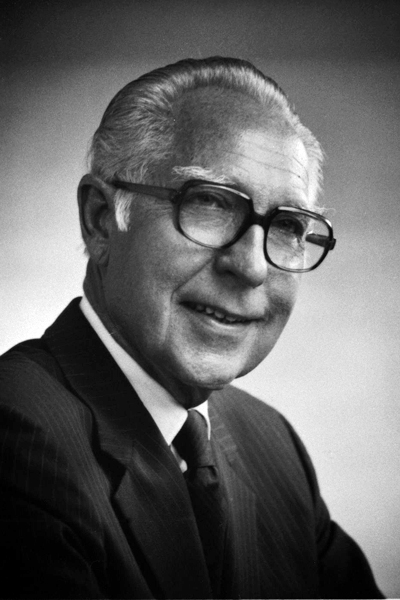 Baugh was founder and retired senior chairman of SYSCO Corp. He served Baylor from 1987-96 as a trustee and regent and generously supported numerous Baylor programs and projects, wherever he saw a need, for more than 20 years.

"John Baugh was one of those iconic figures in Baptist life who was deeply dedicated to his family and his faith," said Baylor University President John M. Lilley. "He was the complete entrepreneur not only in the founding of SYSCO Corporation but in every endeavor to which he committed himself. Baylor University greatly benefited from his long service as regent and benefactor. His daughter, Babs, continues in that tradition of service."

In 1991, Mr. Baugh and his wife, Eula Mae, received one of Baylor's most distinguished awards - the Founders Medallion - which is reserved for men and women whose service and contributions have been unusually significant to the life and future of the university. In addition, the Baughs were the inaugural recipients of a custom Baylor stained-glass hanging, which is awarded at the highest level of The Medallion Fellowship.

The Baughs were among the founding benefactors of Baylor's George W. Truett Theological Seminary, which began in fall 1994 with 51 students enrolled in classes at First Baptist Church, Waco. In 1997, the Baughs provided the lead gift to construct a permanent home for Truett Seminary.

On Jan. 14, 2002, the 64,000-square-foot Baugh-Reynolds Campus of Truett Seminary held its first classes, and now encompasses a student body of more than 380 students.

One of the entrepreneurship program's first benefactors, Baugh was himself an entrepreneur. Born and raised in Waco, he started working at a grocery store when he was in junior high school, before going on to found SYSCO, the largest wholesale food distributor in the world.

In 1989, the Baughs established the John F. Baugh Center for Entrepreneurship in the Hankamer School of Business, which supports the theory of family-owned business. The Baugh Center assists entrepreneurial efforts through the FastTrac Entrepreneurial Training Program, the Innovation Evaluation Program and the Institute for Family Business.

The Baughs have donated funds toward more than 20 programs and projects at Baylor throughout the years, including the School of Music and School of Social Work, endowed scholarships, academic programs, facilities such as the Glennis McCrary Music Building and the McLane Student Life Center, athletic programs, and various memorial and tribute funds in honor of Baylor faculty members.

"Our thoughts and prayers are with his family," May said. "We will all miss this giant, yet self-effacing, strong, yet gentle, confident, yet humble man...a man among men. The last time I heard him speak, after receiving a significant award from Baylor University, he quietly said that he would have been nothing were it not for the love he received from his wife and daughter and his love for them."

Baugh served as chairman of food industry and other business and professional organizations, received the Herbert Hoover Award and other industry awards, and was listed in Who's Who in America and Who's Who in the World.

He was a founding trustee of Houston Baptist University. In addition, he was a director of the Baptist Foundation of Texas for more than 25 years, including service as its chairman.

Baugh was an active Rotarian, with membership in the Houston Downtown Rotary Club for more than 40 years. He was a member of Tallowood Baptist Church in Houston.

He is survived by his wife, Eula Mae, an Alumna Honoris Causa of Baylor, and a daughter, Barbara (Babs) Baugh, who attended Baylor.