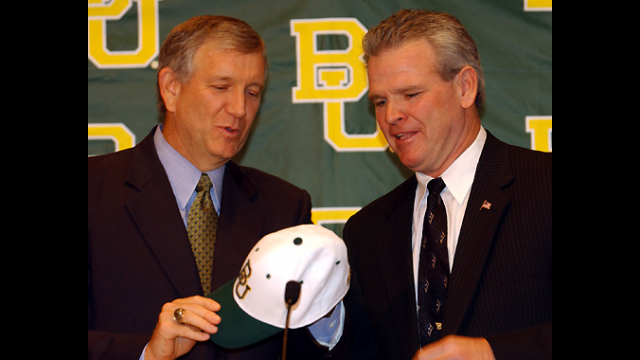 Baylor University introduced Guy Morriss as the Bears' new head football coach at a news conference Wednesday on campus at the Sheila and Walter Umphrey Law Center. The news conference, which was streamed live on the Internet, is now available on-demand at http://www.baylortv.com/.

"The opportunity to return home to Texas and to do so at a great institution like Baylor were the primary factors in my decision to take this job," Morriss said. "I know there is a lot of work ahead and the challenges are great, but I have confidence that we can help Baylor win again. Football is important to the state of Texas and to people who love Baylor; those are two pretty good ingredients for success."

Morriss resigned at Kentucky Monday after six seasons, the final two as head coach. He led the Wildcats to a 7-5 record last season, including wins over SEC West Division champion Arkansas and 17th-ranked Louisville.

"Guy Morriss is a perfect fit for Baylor football," Director of Athletics Tom Stanton said. "His perseverance through his playing and coaching career demonstrates a man who knows what it takes to succeed. The response to this hire that I've received in the last 24 hours from Baylor people, outside observers and the Texas football community has been overwhelming."

Morriss has 14 years of experience as a coach at the high school, collegiate and professional levels. He spent 18 years in the National Football League, where he was an All-Pro player, played in two Super Bowls and coached for three seasons. He is a native Texan who played high school and college football in Texas and has recruited the state for years.

A native of Colorado City, Texas, Morriss is a former All-Southwest Conference lineman at TCU.

"Our patience has been rewarded with the hiring of Guy Morriss," University President Robert Sloan Jr. said. "Coach Morriss' head-coaching experience, proven 'turn-around' ability, commitment to our distinctive mission, and ability to recruit within Texas make him the ideal person to lead Baylor football into the future. I appreciate the support and encouragement of so many of the Baylor family over the last weeks and look forward to a strengthened and renewed Baylor football program in the months to come."

In keeping with its policy as a private institution, details of the contract were not disclosed.