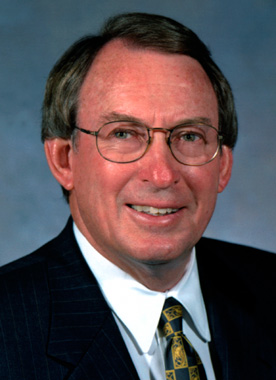 Dr. Donald D. Schmeltekopf, provost and vice president for academic affairs at Baylor University since 1991, announced during the fall faculty meeting today his plans to retire from the post effective May 2003.

A tenured professor of philosophy, Dr. Schmeltekopf will remain at the University after his retirement as provost and engage in a project of leadership development among Christian colleges and universities throughout the United States.

"This is a bittersweet moment for me personally and for Baylor University," said President Robert B. Sloan Jr. "Don Schmeltekopf has guided Baylor's academic 'ship of state' through what has perhaps been the most significant period in the University's modern era. His commitment to the idea that faith and learning are not mutually exclusive found perhaps its greatest expression through his work in developing Baylor 2012, our 10-year vision.

"It was through Dr. Schmeltekopf's personal leadership that so much of our faculty community came together to produce the academic portion of Baylor 2012, and for that leadership I am truly grateful," Dr. Sloan said. "Beyond his professional importance to this institution, though, is his personal impact on my administration, and indeed on my life."

During the 11 years Dr. Schmeltekopf served as provost, Baylor created four new academic divisions - George W. Truett Theological Seminary, the School of Engineering and Computer Science, the School of Social Work and the Honors College; added Ph.D. programs in biology, church-state studies, sociology, philosophy, and mathematics; established the Baylor Interdisciplinary Core program. In addition, participation in international studies programs has grown significantly, the university's faculty has grown from 580 to 750, faculty research and scholarly activity has increased, the University Scholars and Distinguished Professors program was initiated, and faculty compensation has improved to rank in the top half of Big 12 institutions.

"I cannot imagine, for me, a greater opportunity within the academic world than serving as provost of Baylor University. I believe deeply in the mission of Baylor as an eminent Christian university," Dr. Schmeltekopf said. "This work has been my life's passion for the past 12 years, and I have a great sense of satisfaction about what has been accomplished. These accomplishments are owing to the two presidents I have served under and to the deans, faculty, and administrative colleagues with whom I've been privileged to work. In a nutshell, Baylor is simply a fabulous place to be the provost."

Dr. Sloan said he has asked Dr. Schmeltekopf to use his experience, networks and passions in pursuit of a leadership development program for Christian higher education.

"I believe this is not only an area uniquely suited to Dr. Schmeltekopf's God-given gifts, but also a field 'white unto the harvest.' Baylor has a role to play in leading Christian institutions of higher learning generally, and Baptist institutions in particular. I believe Dr. Schmeltekopf will accept the challenge of providing that leadership with creativity, energy and grace."

The president announced that a faculty search committee will be formed that will be charged with making a careful examination of internal candidates for provost as well as conducting a national search to ensure that the University exhausts all possibilities in generating a robust pool of candidates. The committee also will be charged with bringing the president recommendations within the fall semester. The Council of Deans will act in an advisory capacity.

"As a result of the succession planning and leadership development that has occurred throughout the Executive Council, and in particular within the Provost's Office, we are in the unique position of having some strong internal candidates to succeed Dr. Schmeltekopf," Dr. Sloan said. "I believe that is a sign of a healthy organization - when it has the option of drawing on talent within to accomplish world-class objectives."

Dr. Schmeltekopf earned a B.A. degree from Baylor in 1962 and holds a master of divinity from Southeastern Baptist Theological Seminary and a Ph.D. from Drew University. He also did post-graduate study at Princeton University. Prior to joining the Baylor administration in 1990 as vice provost, he served as vice president for academic affairs, dean of the faculty and provost at Mars Hill College in North Carolina. He has been a program officer for the National Endowment for the Humanities and has served on the philosophy faculty at Union College in New Jersey. Currently a member of the executive committee for the American Council on

He and his wife, Judy, have four children: William, Elizabeth, Andrew and Stephen; and three grandchildren. The Schmeltekopfs are members of Seventh and James Baptist Church, where he serves as a deacon.