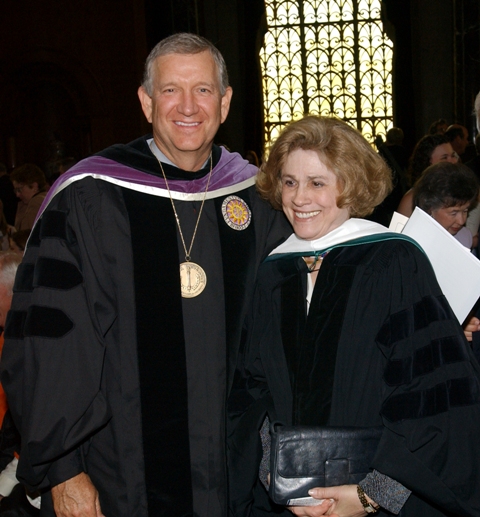 Beloved, "brilliant" and treasured Baylor University English Professor Ann V. Miller passed away Saturday, Aug. 12, in Waco after a long battle with cancer. She was 80.

A gathering of family and friends will be held from 6 to 8 p.m. Friday, Aug. 18, at Baylor's Hughes-Dillard Alumni Center. A memorial service will be held at 11 a.m. Saturday, Aug. 19, at First Baptist Church of Waco.

"To so many students, Ann Miller was an iconic figure, such an incredible spirit. Whether in class, at church or in campus organizations, her spirit was extraordinary. Her loss is immense," said Baylor President John M. Lilley. "Since becoming president, I have spoken with her periodically. Just two weeks ago we had a wonderful conversation in her home. It was obvious that she was physically weak, but her mind was very sharp and her wit was intact. Thousands of alumni, colleagues and other friends will miss her."

Born in Dallas, Miller graduated from Baylor in 1949, as one of two students that year who had earned an honors degree. She pursued advanced studies at the University of Texas under the tutelage of the celebrated Harry Ransom and returned to Baylor to complete her master of arts degree in English. Department Chairman Charles G. Smith pronounced her to be one of the most "brilliant" students he ever taught.

Although she taught classes at Baylor in the 50s, Miller began teaching full-time in the English department in 1961. She was designated a Master Teacher of Literature in 1982, one of the first two Baylor professors to attain this distinction, and was named a full professor in 1984.

Also recognized as a poet, Miller was revered by many alumni as the professor who heightened their appreciation for literature and enhanced their writing skills. She was named Outstanding Professor by Mortar Board 12 times, by the student body, by Student Congress and by alumni groups repeatedly during her tenure.

(Read the recollections from two of Ann Miller's former students about her remarkable influence on their lives: July/August, 2002 issue of Baylor Magazine, "Undeniably Ann" by Dr. Gayla McGlamery, BA '76, professor of English at Loyola College in Baltimore, Md. and 2000 issue of Collegium, "Good Doctors, Good Human Beings" by Dr. Scott Harper, B.A. '88, M.D. '92, now with the Centers for Disease Control.)

In 2003, Baylor honored Miller with an honorary Doctor of Humane Letters degree. Miller's degree citation read, in part, "Having now been a professor herself in the English department for over 40 years, Professor Miller continues to be pronounced 'brilliant' as she brings literature to life for and in her students. Her abilities to challenge, encourage, inspire and exhort students to reach beyond themselves are legendary. In recognition of her lifelong dedication to Baylor, to the arts and to outstanding teaching, Baylor University bestows the honorary degree Doctor of Humane Letters upon one of its most admired and treasured graduates and faculty members, Ann Vardaman Miller."

After the presentation, Miller spoke about her love for Baylor and for teaching: "I am profoundly moved and my deepest gratitude goes to the administration for this capstone experience which humbles me utterly. This award does not come only to me; it honors teaching itself. It honors those professors of the past. I like to think it honors those outstanding colleagues with whom I have walked this campus. Professors, who through their scholarship and generosity of spirit, have influenced thousands of students. This award belongs to the students who have made teaching a sheer and surpassing joy, nothing less. I will remember this [moment] always. Will, as Yeats said, 'Hear it in the deep heart's core.'"

Miller was preceded in death by her husband, Dr. Robert T. Miller, who served as chairman of Baylor's political science department and was The R.W. Morrison Distinguished Professor Emeritus of Political Science until his death in 1996. In 1998, the Millers were honored with the establishment of the Robert T. and Ann V. Miller Endowed Scholarship Fund by Ambassador Lyndon Olson Jr., and his wife, Kay.