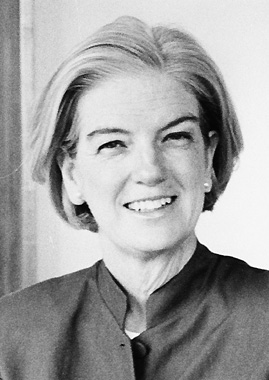 Marjorie Scardino, a 1969 Baylor graduate, has been named Britain's most powerful woman by the UK magazine Management Today.

Scardino, who is chief executive officer of Pearson PLC, a London-based international media and publishing empire, was ranked first in the magazine's recently published "Britain's 50 Most Powerful Women" list. In the second spot on the list was Cherie Booth, wife of British Prime Minister Tony Blair.

The magazine said of Scardino, "Despite tough times for Pearson, where profits fell ú39m last year, Scardino's position as queen of UK plc remains unassailable." The publication adds that, at the age of 55, she is "still the only female CEO" of one of the United Kingdom's top 100 companies.

Earlier this year, Scardino became a British citizen, and in February she was invested as a Dame Commander of the British Empire at Buckingham Palace.

In January 2000, Scardino was honored as one of Baylor's Distinguished Alumni. Born in Flagstaff, Ariz., she was raised in Texarkana, the daughter of Robert Morris, a local defense plant engineer, and his wife, Beth. Scardino received a bachelor of arts degree in psychology from Baylor in 1969, and a law degree from the University of San Fransisco in 1975.

Her first job was at the Associated Press in Washington, D.C., where she met the man she would marry, Albert Scardino, a reporter at the wire agency. Later, the couple started a weekly newspaper in Georgia, and in 1985 Marjorie Scardino became head of North American operations for the British magazine, the Economist. Her notable success in that role led to her eventual appointment in the 1990s as the chief executive officer of the Pearson group, which employs thousands of people in more than 60 countries.

Scardino is known for her informal leadership style at the huge British company, which owns the Financial Times and Penguin Publishing. She has been credited with dramatically reshaping the company during her time at the helm.