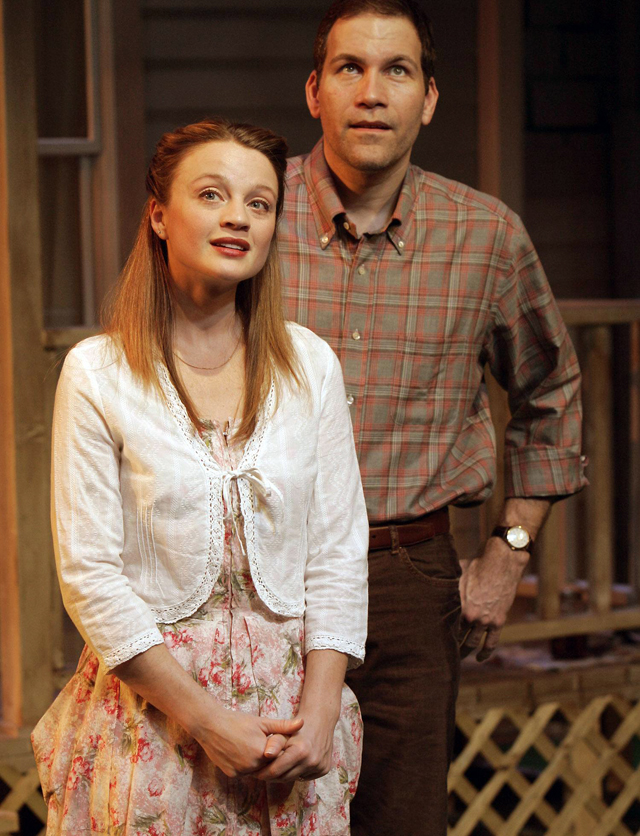 Baylor's Stan Denman, chair of the theater arts department, in the role of Slim Murray, appears with Margot White, who took the lead role of Georgette Thomas, in the New York production of Horton Foote's "The Traveling Lady."

New York theater critics raved about the Baylor University/Ensemble Studio Theater production of Horton Foote's "The Traveling Lady." And now the production has been nominated for Outstanding Revival of a Play by Drama Desk. Additionally, playwright Foote, who has served as Visiting Distinguished Dramatist at Baylor, will receive a lifetime achievement award. The 51st award ceremony will take place on Sunday, May 21, at Lincoln Center.

The Drama Desk Awards, which date back to 1955, are selected by journalists who cover both Broadway and Off-Broadway productions in New York. The award is widely considered one of the top awards for American theater, other than the "Tony," which only honors those shows produced on Broadway.

"We are so pleased and proud for Baylor University and for Horton Foote that our collaboration with the Ensemble Studio Theatre has met with such great success," said Dr. Stan Denman, chair of the theater arts department. "The Drama Desk nomination for Outstanding Revival of a Play is a great boon to our already nationally ranked program, to our students, and our theater alumni. We are thrilled that Baylor's first New York production has met with such critical acclaim. We hope that this is just one of many great things to come for Baylor Theatre."

The production of "The Traveling Lady" ran at the legendary Ensemble Studio Theater during the month of March. Serving as director was Baylor's own Dr. Marion Castleberry, associate professor and director of graduate studies in the theater department. Denman took the lead male role of Slim Murray. Graduate student Daniel Inouye served as assistant to Castleberry.

The production began on the Baylor campus as a part of the Horton Foote American Playwrights Festival in March of 2004, before being revived Off-Broadway at the Ensemble Studio Theatre. "Curtain Up" noted that the play was "cause for rejoicing and acknowledging our indebtedness to Baylor University" for bringing the production to New York City and for giving this 50-year-old play new life.

"I am extremely proud to be named along with such wonderful productions as 'Awake and Sing,' 'Trip to Bountiful' and 'Philadelphia, Here I Come,'" Castleberry said. "I want to thank Baylor University and the department of theater arts for their support throughout this project. I am most happy for Horton Foote. Not only does he have two plays that are nominated for awards but he will be receiving a lifetime achievement award. He is certainly deserving, and I am so proud that he is one of Baylor's own."

Both Castleberry and Denman plan to attend the Drama Desk award ceremony.