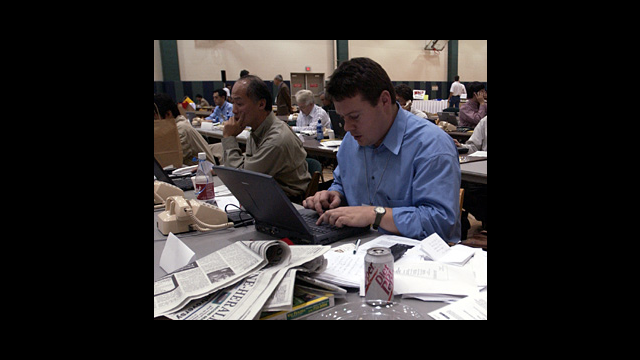 A reporter for the London Daily Telegraph works on his story in the International Media Center located within the SLC.
Tweet
Nov. 12, 2001

More than 200 international and domestic journalists from throughout the world will cover this week's meeting between President George W. Bush and Russian President Vladimir Putin from an international media center based in Baylor University's McLane Student Life Center.

The meeting between the two world leaders will take place Nov. 14-15 at the President's ranch in Crawford. Radio, television and print media from Russia, Germany, Japan and Great Britain, as well as several Middle Eastern and Latin American countries, are expected to arrive Nov. 13 at the SLC. Other U.S. media outlets not members of the White House press corps also will be based in the SLC.

The SLC racquetball courts, fitness areas, climbing rock and pool will remain open to Baylor students, faculty and staff during the duration of the meeting, although access to the gym and the third floor jogging track will be closed through Thursday. The SLC will resume normal operations on Friday, Nov. 16.

Baylor has provided the State Department with the infrastructure for the international media center, including Internet access, tables and chairs, copiers, fax machines, marker boards, audio/visual equipment and satellite uplink capability. Edit space also has been set up for international television networks.