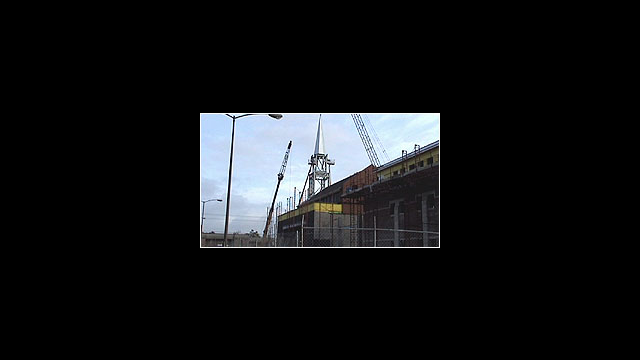 Construction is proceeding on the new Truett Seminary campus.
Tweet
May 29, 2001

Baylor University added a new dimension to its skyline May 29-30, as a construction crew placed the steeple and a nine-foot gold leaf cross on the chapel of the new George W. Truett Theological Seminary complex.

Towering at more than 100 feet, the chapel spire is clearly visible from Interstate 35. The $17 million, 64,000-square-foot facility, which is expected to be completed in the spring of 2002, is located on Dutton Avenue across from Russell Hall on the Baylor campus.

"The Truett Seminary complex is probably one of the most impressive buildings adjacent to the Interstate between Dallas and Austin," said Truett Dean Paul W. Powell. "It's a milestone, really, sending the steeple into the air. I feel a little like Winston Churchill when he said, 'This is not the end. It is not even the beginning of the end. But it is, perhaps, the end of the beginning.' This is the beginning of a new day and new era for Truett Seminary."

Truett Seminary broke ground on the complex on Feb. 2, 2000. In addition to the spire, the facility will feature a 550-seat chapel, funded by a $2.5 million grant from the Robert M. Rogers Foundation of Tyler and named in honor of Powell; a Great Hall; a 100-foot by 100-foot landscaped, enclosed courtyard; a teaching chapel named in honor of Baylor President Robert B. Sloan Jr., who was Truett Seminary's founding dean; classrooms and meeting rooms; and faculty and administrative offices. Longtime Baylor benefactors John and Eula Mae Baugh of Houston provided a $5 million lead gift in November 1997 for the seminary's construction.

Truett Seminary held its first opening convocation service on Aug. 28, 1994, in the worship center of First Baptist Church of Waco. When seminary classes officially began on Aug. 31, 1994, there were 51 students registered. Since then, Truett Seminary's enrollment has quintupled to more than 250 students, while 146 students have received their master of divinity degrees from Truett. The seminary also offers a doctor of ministry degree, a joint master of divinity/master of music degree in conjunction with Baylor's School of Music, and a joint master of divinity/master of social work degree in conjunction with the School of Social Work.

Truett officials anticipate a fall 2001 enrollment of about 300 students.

For more information, contact Truett Seminary at (254) 710-3755. More information about Truett and the building project is available online at https://www.baylor.edu/seminary/ .