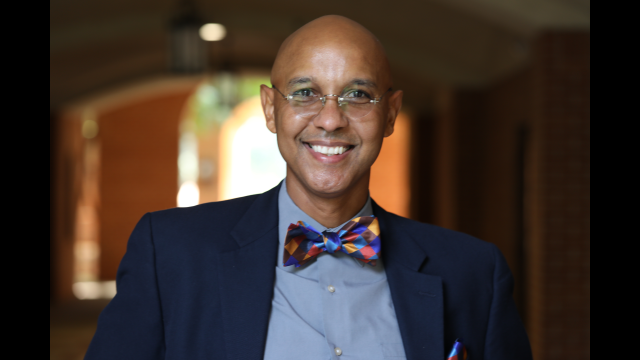 WACO, Texas (Jan. 18, 2023) Ronald Angelo Johnson, Ph.D., associate professor and The Ralph and Bessie Mae Lynn Chair of History at Baylor University, has been awarded the Alpha Chi Distinguished Alumni Award, an annual award given to one alumnus from the organization in recognition of public service that exemplifies the Alpha Chi spirit of making scholarship effective for good. Johnson will be presented with the award during Alphi Chi’s annual convention in Albuquerque, New Mexico, in March.

The Distinguished Alumni Award appreciates the rigors of the undergraduate experience, and the interdisciplinary array of classes taken, as campus life and spiritual formation help to shape students in early adulthood. It evaluates how Alpha Chi members employ their academic development and professional achievements to improve people's lives across the world.

"To receive this award affirms the difficulties and uncertainties of being a first-generation college student with dreams beyond my imagination," Johnson said. "My induction into Alpha Chi was my first university ceremony of recognition. I remember hearing my name called—me, the son of a World War II veteran who finished only middle school—alongside the other inductees. I thought, 'I really belong here.'"

Johnson has had a fascinating and diverse career, ranging from his academic pursuits at Baylor University and Texas State University to his service in the Air Force, the Navy, the Central Intelligence Agency and the Foreign Service to pastoral ministry. He said, "It reminds me that only the grace of Jesus Christ and the faithful leading of the Holy Spirit through so many years made any of those things possible."

Johnson is the first faculty member at Baylor to receive the honor. He joins a list of prominent award recipients, including NASA astronaut Clayton Anderson, journalist Dan Rather and many other distinguished physicians, scientists, artists and educators.

Alpha Chi was established by a cohort of universities in Texas, including Baylor. The chapter at Baylor University, Chapter 3, Texas Gamma, is considered a charter chapter with roots going back to a meeting in 1923 on the campus of Southwestern University, during which the first constitution was adopted for the young organization. Many Alpha Chi distinguished alums are native Texans or graduates of Texas-based universities.

Ronald Angelo Johnson, Ph. D., embraces a transnational approach to researching African American history in the early United States, with specializations in diplomacy, race, and religion. He is currently writing a book on racialized U.S. diplomacy with Haiti from the American Revolution through Reconstruction. The study also examines the impact of Haitian immigration on early U.S. religion and culture. He has published articles, essays, and reviews in Early American Studies, Diplomatic History, the Journal of African American History, the Journal of Caribbean History, Baptist History & Heritage, and the American Historical Review.

The College of Arts & Sciences is Baylor University's largest academic division, consisting of 25 academic departments in the sciences, humanities, fine arts and social sciences, as well as 10 academic centers and institutes. The more than 5,000 courses taught in the College span topics from art and theatre to religion, philosophy, sociology and the natural sciences. Faculty conduct research around the world, and research on the undergraduate and graduate level is prevalent throughout all disciplines. Visit www.baylor.edu/artsandsciences/.