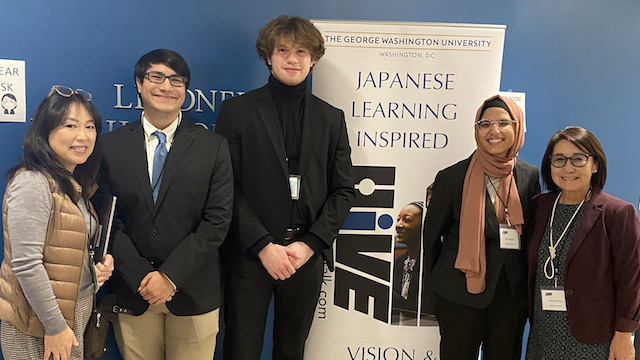 J.LIVE is a Japanese language speech competition inspired by TED Talks that gives both college and high school students a chance to demonstrate their presentation skills and Japanese proficiency. Baylor students Salma Battisha, Evan Abella and Gabreel Elsawi won all three awards in the College I category, representing the first time in the history of the competition that all three winners in the College I category came from the same school.

The Gold Award went to Battisha, a sophomore computer science major minoring in Japanese, for her speech titled, The Secret of Beauty. As the winner, Battisha received a cash award of $300 and a scholarship, airfare and a $3,300 stipend to study in an eight-week summer intensive Japanese language course at Nanzan University in Nagoya, Japan.

Abella, a senior majoring in linguistics and Spanish, received the Silver Award, which included a cash prize of $200 for his presentation, How I Learned to Ask Questions. Elsawi, a junior philosophy major with a minor in Japanese, received the Bronze Award with its cash prize of $100 for his speech, Steel-Like Heart.

“It took a great deal of commitment to participate in the J.LIVE Talk,” said Yuko Prefume, Ed.D., senior lecturer in Japanese at Baylor. “I was impressed with their dedication and determination. They spent many hours preparing for the competition late at night and on the weekend, in addition to working on their regular school assignments.”

Unlike a traditional speech contest, J.LIVE Talk emphasizes the presentation skills necessary for achieving effective communication in today’s world. This contest has personal meaning to each student as they choose their topics, with each presentation expected to have an impactful message.

“I was very moved by how our students delivered what was important for them in Japanese,” said Yuko Prefume, Ph.D., senior lecturer in Japanese for Baylor’s Department of Modern Languages and Cultures. “It just confirms that language learning teaches the mind, and not just skills.”

In addition to the students’ awards, Prefume received a Special Teacher’s Award for mentoring Battisha. She also mentored Elsawi. Yoshiko Gaines, senior lecturer in Japanese, mentored Abella in preparation for the competition.

The final round of the competition can be viewed on YouTube.

The College of Arts & Sciences is Baylor University’s largest academic division, consisting of 25 academic departments in the sciences, humanities, fine arts and social sciences, as well as 10 academic centers and institutes. The more than 5,000 courses taught in the College span topics from art and theatre to religion, philosophy, sociology and the natural sciences. Faculty conduct research around the world, and research on the undergraduate and graduate level is prevalent throughout all disciplines. Visit baylor.edu/artsandsciences.