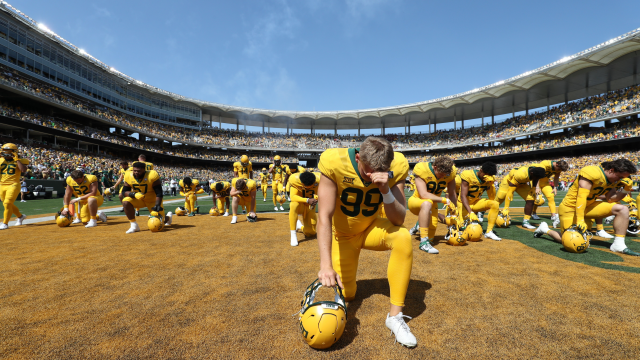 WACO, Texas (Nov. 30, 2022) – Athletics can occupy an ambiguous place within a university's greater mission, particularly at religious institutions. Yet, little research has been conducted – until now – to understand student-athletes’ connection with personal religious beliefs. A recent study of Baylor University student-athletes by a multidisciplinary research team challenged conventional wisdom about student-athletes’ religiosity, revealing that Baylor student-athletes were more religious than their non-athlete peers.

The study’s findings, published in the Journal of College and Character, were based on a survey of more than 800 graduating seniors as part of the longitudinal Baylor Faith and Character Study, which tracks the long-term impact of a Baylor education on a person’s faith and character. The research team compared student-athletes and non-student-athletes on religious beliefs, religious behaviors and religious identity, finding that Baylor student-athletes were more religious than their peers in all three forms of religiosity.

The purpose of this particular study was to better understand the relationship of athletic participation and student-athletes’ religiosity. Although the researchers theorized that student-athletes would report lower levels of religious belief, behaviors, and identity than non-athletes, the data showed otherwise:

"Even at the highest level of intercollegiate athletics, coaches and athletics staff can champion a university's religious culture and create an environment that encourages student-athletes religious development," said lead author Daniel Allen, M.A. ’19, Ph.D. ’22, who was a doctoral student in sociology at Baylor when the study was conducted. He is now an assistant professor of sociology at Olivet Nazarene University.

Among the key takeaways of the study for Baylor:

Few previous studies have examined student-athletes in Christian colleges and universities, with most of them case studies that do not often translate to every campus, the researchers said. Baylor is a unique setting for such a study as it is a Christian university that competes in a Power Five conference of NCAA Division I. Most Christian colleges and universities are small and affiliated with NCAA Division III or NAIA.

"One of our goals with this project was to encourage other institutions to use similar surveys and methods," said Allen, adding that the framework from the study can be applied to their specific context and benefit the athletic programs' holistic development of their students.

This research project began in a Fall 2020 course for both graduate and undergraduate students titled “Religion and Character on Campus” taught by Kevin Dougherty, Ph.D., professor of sociology in the College of Arts & Sciences at Baylor. Teams of three-to-four students in the class wrote research papers using survey data from the Baylor Faith and Character Study.

With Dougherty, faculty members Perry Glanzer, Ph.D., professor of educational foundations in the School of Education and resident scholar with Baylor's Institute for Studies of Religion, and Sarah Schnitker, Ph.D., associate professor of psychology, helped revise the papers for publication. Glanzer, Dougherty and Schnitker are co-directors of the ongoing Baylor Faith and Character Study.

While this study does not differentiate religiosity by sport, Dougherty said, it does support knowledge of the religious beliefs of student-athletes on the college campus. These findings suggest that athletic departments may be able to work within—and not simply compete with—the greater university mission of holistic education.

The College of Arts & Sciences is Baylor University's largest academic division, consisting of 25 academic departments in the sciences, humanities, fine arts and social sciences, as well as 10 academic centers and institutes. The more than 5,000 courses taught in the College span topics from art and theatre to religion, philosophy, sociology and the natural sciences. Faculty conduct research around the world, and research on the undergraduate and graduate level is prevalent throughout all disciplines. Visit baylor.edu/artsandsciences.