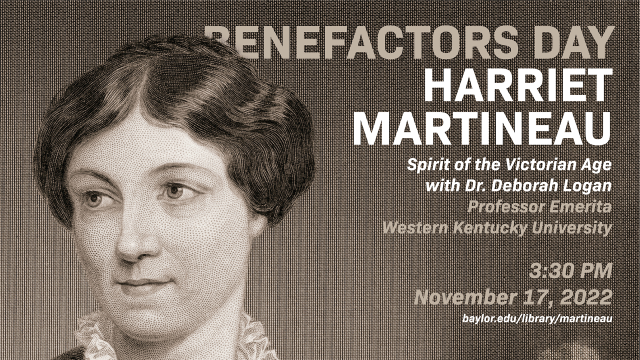 Logan is the world’s leading expert on Harriet Martineau (June 12, 1802 - June 27, 1876), a highly influential intellectual, writer and journalist, known for her writings on political economy, sociology and feminism throughout the Victorian era. She rose to fame in 1832 after writing the popular book, Illustrations of Political Economy, which features 25 short stories that highlight the lives of ordinary people in different social environments. While her books outsold other popular authors of the period, her writings fell into obscurity and the works of other writers such as Elizabeth Barrett Browning, Charlotte Bronte and George Eliot overshadowed her legacy.

“Harriet Martineau was a primary representation of the spirit of the age,” Logan said. “Her commentary was always thoroughly grounded in historical precedent and demonstrated her insightful vision for the future.”

Logan’s publications include several anthologies of Martineau’s works as well as books and articles that explore Martineau in her context. Logan recently donated her personal Martineau collection to the Armstrong Browning Library and Museum, which features original manuscripts, modern editions of Martineau’s works and additional academic volumes. The Martineau Collection will be formally opened as part of this year’s Benefactors Day celebration.

This event is free and open to the public. For more information about the in-person event or to request Zoom credentials, visit baylor.edu/library/martineau. To browse the contents of the Martineau collection, search Baylor’s online catalog.