Baylor Homecoming Parade to Be Broadcast Live on KCEN-TV Ch. 6 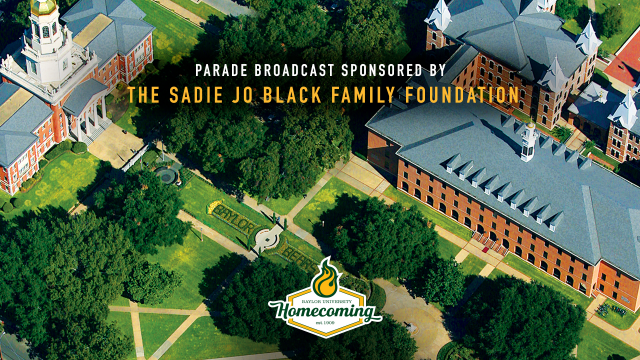 WACO, Texas (Oct. 18, 2022) – Baylor University and KCEN-TV Ch. 6 (NBC) will team up again to televise the 113th anniversary Baylor Homecoming Parade, one of the oldest and largest collegiate homecoming parades in the nation, with live coverage from 7:30 to 9 a.m. Saturday, Oct. 22, from Fifth Street on the Baylor campus.

The parade broadcast on KCEN-TV is made possible by the generous support of the Sadie Jo Black Family Foundation. Returning to host the parade this year are the “Voice of the Bears” John Morris and Lori Fogleman.

The Baylor Homecoming Parade will begin at 7 a.m. at Eighth Street and Austin Avenue in downtown Waco. It will travel down Austin and make a right on Fourth Street. Progressing down Fourth, the parade will go under the I-35 overpass, turn on Dutton Avenue and proceed to enter campus on Fifth Street. The parade is expected to arrive at Baylor at approximately 7:30 a.m.

Following the parade, the Baylor Bears will host the Kansas Jayhawks with kickoff at 11 a.m. at McLane Stadium. Limited tickets are available at BaylorBears.com.

History of the Baylor Homecoming Parade

In the fall of 1909, Baylor University alumni received a surprising invitation from their alma mater. A postcard signed by three professors asked the graduates to return to campus to “renew former associations and friendships, and catch the Baylor spirit again.”

Thus began Baylor University’s Homecoming, the nation’s first collegiate Homecoming celebration. Throughout the years, the Baylor Homecoming Parade – one of the oldest and largest collegiate Homecoming parades in the nation – has featured horse-drawn carriages and wagons, bands, student and civic organizations, dignitaries and more. Student organizations create floats that add to the campus spirit for the upcoming football game, and giant balloons and other participants add to the excitement of the parade.

After the first parade traveled from downtown Waco to the campus in 1909, Baylor defeated TCU in the Homecoming football game 6-3 on Carroll Field, a simple dirt and grass field located behind Carroll Science Building where Vara Martin Daniel Plaza and the Bill Daniel Student Center now stand. Despite the initial success of the first Baylor Homecoming Parade, the event – indeed, Homecoming itself – did not become an annual tradition until after World War II.

Floats first appeared in the parade in 1915. Floats became standard for the parade during the 1920s. It wasn’t until the 1950s that the floats began to take note of Baylor’s opponent for the Homecoming football game. By 1960, practically every float carried a slogan that forecast doom for the mascot of the opposing team.