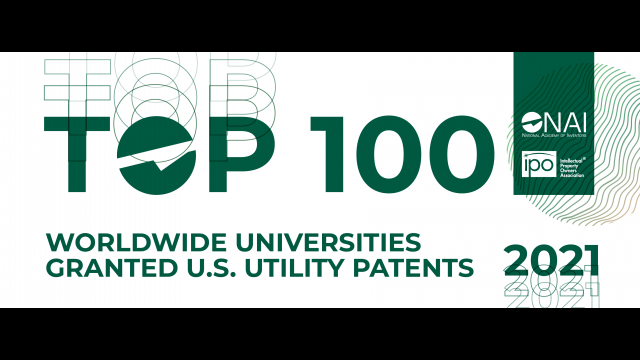 Published annually since 2013, the report ranks the top 100 universities named as the first assignee on utility patents granted by the USPTO in the 2021 calendar year. The full report can be found here.

Baylor is among only three Texas universities (University of Texas at Austin and Texas A&M University), an additional 59 prestigious U.S. research universities and 38 international research institutions included in the report.

“It is an incredible honor to be included among these elite research institutions around the globe—and a significant validation of our efforts to produce research that makes an impact,” said Kevin Chambliss, Ph.D., vice provost for research at Baylor and professor of chemistry and biochemistry. “Baylor faculty are problem solvers, and they are supported by a disciplined process that transports their research from the laboratory to the marketplace. Our Lab to Market Collaborative team, along with the Office of General Counsel, demonstrate meaningful teamwork with our faculty that has produced not only patents, but the formation of companies and products. We are grateful for the recognition from NAI and IPO and are poised for further growth.”

As a Research 1 university, Baylor faculty are at the forefront of advancing human knowledge, contributing to their disciplines and creating solutions to some of the world’s most meaningful challenges – with Baylor's distinct voice and Christian mission – through grants, partnerships and collaboration both on and off-campus.

Lab to Market Collaborative (L2M) is a unity of effort between Baylor and Waco Ventures to establish a perpetual pipeline of ideas, inventions and technologies and effectively move them from the laboratory to the marketplace with speed and agility. L2M uniquely translates technology into products and services that have real-world impact.

Baylor’s research infrastructure is headlined by the strategic focus of Illuminate and by Baylor’s core research facilities, which provide university and industry partners with the focus, funding and facilities needed to conduct groundbreaking research. Through the Office of the Vice Provost for Research, the Technology Commercialization and Industry Engagement division, which includes L2M, assists Baylor faculty by identifying industry partners who seek the expertise of faculty researchers to solve problems related to their industry and encouraging collaboration that could support the research leading to a solution.

When collaborations or other funded research lead to technological discoveries or products that have potential for commercialization, the Technology Transfer Office reviews the technology, including assessing and evaluating the intellectual property for appropriate protection, and when appropriate, navigating the course toward patents and commercialization, including a range of IP options.

Fifty-seven member Institutions of the NAI are represented this year in the Top 100, holding an aggregate total of 4,663 patents spanning a wide variety of fields, such as medicine, technology and engineering. The IPO Top 300 Patent Owners List, published annually since 1985, ranks organizations worldwide that received the most U.S. utility patents during the previous calendar year. It lists the total number of patents for 2021’s Top 100 universities (including U.S. and international universities) at 7,665.

“Innovation based on university technology continues to be a key factor in economic development. The expansion of technology and innovation are fundamental to the success of a university,” said Paul R. Sanberg, president of the National Academy of Inventors. “The NAI is pleased to be releasing this list of the top innovation universities in the world in conjunction with the IPO for the 10th year in a row.”

“University patents ignite a culture of growth and innovation which, in turn, stimulates the economy," said Jessica Landacre, executive director at the IPO. “We are pleased to partner with NAI to publish the Top 100 Worldwide Universities Granted U.S. Utility Patents.”

*Note: The information provided in this list is based on data obtained from the U.S. Patent and Trademark Office. For this report, a university is defined as an institution that grants undergraduate-level degrees. Patents reported are utility patents granted during the 2021 calendar year. When a patent is assigned to one or more entities, credit is given to the first named entity. The number of patents granted does not necessarily indicate the value of a university’s technology, the effectiveness of its research or whether its patents will be successfully licensed and/or brought to market. For inquiries, or if you have a research foundation that should be combined with your university assignment in the future, contact info@academyofinventors.org.

ABOUT THE NATIONAL ACADEMY OF INVENTORS

The National Academy of Inventors is a member organization comprising U.S. and international universities, and governmental and non-profit research institutes, with over 4,000 individual inventor members and Fellows spanning more than 250 institutions. It was founded in 2010 to recognize and encourage inventors with patents issued by the U.S. Patent and Trademark Office (USPTO), enhance the visibility of academic technology and innovation, encourage the disclosure of intellectual property, educate and mentor innovative students, and translate the inventions of its members to benefit society. The Academy and the USPTO have enjoyed a collaborative partnership since the founding of NAI. Most recently this has been reflected in their joint mission to expand access to the innovation ecosystem through a focus on diversity, equity, and inclusion.

The Intellectual Property Owners Association (IPO) is a trade association for owners of patents, trademarks, copyrights and trade secrets. IPO is the only association in the U.S. that serves and advocates for all intellectual property owners in all industries and all fields of technology.