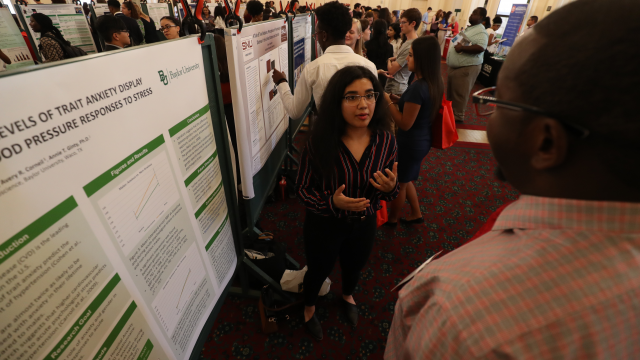 WACO, Texas (Sept. 1, 2022) – The U.S. Department of Education has renewed Baylor University’s five-year grant for the Ronald E. McNair Postbaccalaureate Achievement Program, which prepares high-achieving college students from diverse backgrounds for doctoral studies. The Baylor McNair grant was renewed at $1,309,440 ($261,888 each year) for the next five-year grant period.

In 2017, Baylor received its first highly competitive grant for the Baylor McNair Scholars program, one of seven federal TRIO programs and one that prepares first-generation, low income and/or underrepresented undergraduate students, as early as their sophomore year, for graduate education by providing paid research opportunities over the summer guided by faculty mentors, professional development workshops, free GRE preparation and assistance with graduate school applications.

“We are so excited about the renewal of this grant that provides an opportunity to impact students from diverse backgrounds at Baylor,” said Steven Fernandez, director of the McNair Scholars Program within Baylor’s Paul L. Foster Success Center. “Our Baylor McNair Scholars are extremely high-achieving students with so much potential, and it has been such a joy to see them immerse themselves in research with their dedicated Baylor faculty mentors and present their work at academic conferences, including McNair Research Conferences. The most fulfilling moment is seeing our students graduate from Baylor and begin their doctoral programs at prestigious universities throughout the country. They will be the future mentors for students who share similar experiences and backgrounds, demonstrating that they, too, can achieve great things.”

The application for next year’s cohort of Baylor McNair Scholars is now open on the McNair website.

Another benefit of the national McNair Scholars program is the opportunity to welcome McNair Scholars from other universities to the Baylor campus for the annual McNair Research Conference.

On Aug. 4-5, Baylor hosted more than 200 McNair Scholars for this year’s in-person conference, sponsored in part by the Baylor Graduate School. McNair Scholars presented their research to their peers, attended workshops designed to help them along their path to getting their Ph.D.’s and enjoyed a traditional Dr Pepper Hour mixer, networking breakfast and graduate school fair that featured 32 universities, medical schools and research laboratories.

“It was amazing to see so many diverse students from across the country showcase their groundbreaking research at such a high level,” said Ricardo Garza, assistant director of the Baylor McNair Scholars program and a McNair alum. “Not only did our conference provide the stage for these gifted students to present research, it gave us the opportunity to showcase Baylor as a potential future graduate school.”

The Ronald E. McNair Postbaccalaureate Achievement Program is named for Dr. Ronald McNair, a laser physicist and NASA astronaut who was inspired to work hard and persevere in his studies by his family and by a teacher who recognized his scientific potential and believed in him. A graduate of North Carolina A&T State University and the Massachusetts Institute of Technology, McNair was selected by NASA for the space shuttle program in 1978. His first space shuttle mission launched successfully from Kennedy Space Center on Feb. 3, 1984, and he became the second African American to fly in space. Two years later, he was a mission specialist aboard the ill-fated U.S. Challenger space shuttle, which exploded one minute and 13 seconds after launch on Jan. 28, 1986.

After his death, Congress provided funding for the Ronald E. McNair Post-Baccalaureate Achievement Program to encourage low-income and first-generation college students and students from historically underrepresented ethnic groups to expand their educational opportunities by enrolling in a Ph.D. program and ultimately pursue an academic career. The program is dedicated to the high standards of achievement inspired by McNair’s life.