President Linda A. Livingstone Elected Chair of the NCAA Board of Governors 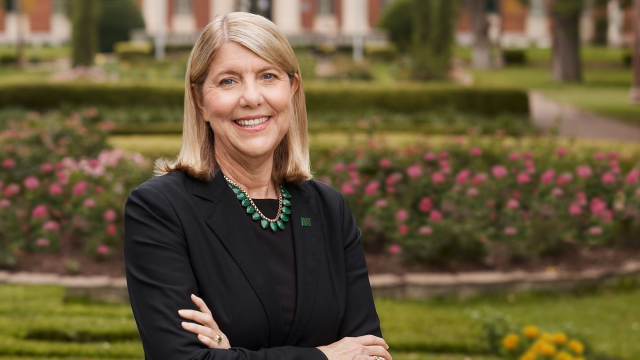 WACO, Texas (Aug. 2, 2022) – Baylor University President Linda A. Livingstone, Ph.D., was elected today as board chair of the NCAA Board of Governors, which met on Tuesday for the first time in its new iteration. Madeleine McKenna, former volleyball student-athlete at California University of Pennsylvania, was elected as the student-athlete voting member.

"It is an honor to be chosen by the board to lead the group at such an important time in the history of college sports," Livingstone said. "We are at a critical moment, with an opportunity to shape the Association and successfully navigate the transformation taking place across all three divisions. We are also undergoing a search for the next president of the NCAA. The work of this smaller board will be vital in determining our way forward."

Rising as one of the nation’s most respected voices in American higher education and for the role of faith-based universities, President Livingstone’s leadership has led to opportunities for her and Baylor to have a presence in the national conversation regarding higher education and intercollegiate athletics.

As the rare Division 1 student-athlete-turned-university-president, President Livingstone was appointed in June to the NCAA Board of Governors as one of just nine voting members – and one of only two Power 5 university presidents – helping lead college athletics during a season of fast-moving changes. She is the current vice chair of the Big 12 Conference Board of Directors, while preparing to assume the role of chair next year. She also was appointed as a member of the NCAA’s initial Constitution and Transformation committees.

In addition, she is chair-elect for the American Council on Education (ACE) board, which represents more than 1,700 colleges and universities on effective public policy and innovative, high-quality practice. She will become chair of the ACE board in March 2023.

Outgoing chair John J. DeGioia will still serve as a member of the Board of Governors. DeGioia, president at Georgetown, has been board chair since October 2020.

"I'd like to thank Jack DeGioia for his service to the board as chair during an unprecedented time," NCAA President Mark Emmert said. "He steadily led his colleagues and the Association with a practical, reasonable approach to the issues. Undoubtedly, we will still benefit from his leadership as a board member."

The new board includes nine voting members and seven nonvoting ex officio members. All three divisions are represented, including among the three graduated student-athletes represented on the board.

"The inclusion of student-athlete voices on the Board of Governors comes at such a critical time, and Bryce, Isaiah and I are honored to represent these voices," McKenna said. "As a former student-athlete, I'm thrilled to see that student-athletes have more opportunity now than ever before. Student-athletes will continue to be at the forefront of the board's decision making."

At its first meeting, the group reviewed and approved its operating policies and procedures and defined its committee/subcommittee structure. The board also received an update on the presidential search. Search firm TurnkeyZRG is in its discovery phase, meeting with governance committees, membership groups and national office staff for input on the position of the NCAA president. The firm has completed 52 listening sessions with more than 245 people.

The board also appointed a Subcommittee on Congressional Engagement and Action to provide guidance to the board on what actions the Association should take to seek congressional partnership in addressing legislative issues. The group will reinforce the importance of academic success, prioritize a positive student-athlete experience and uphold NCAA values including diversity, inclusion and gender equity. Specifically, the subcommittee will identify the Association's specific congressional legislative needs and priorities that best support student-athletes participating in all divisions and at its 1,100 member schools and develop and implement a strategic plan to effectively communicate and engage Congress about the Association's legislative priorities and key areas of ongoing work.

The subcommittee will begin its work immediately and deliver a preliminary report to the board at its next meeting on Oct. 25. Visit ncaa.org for more updates.