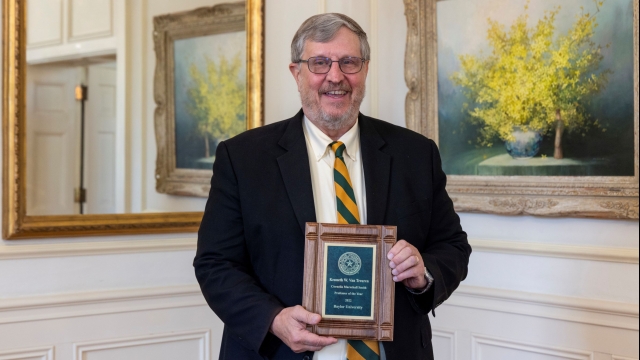 2022 Cornelia Marschall Smith Professor of the Year Kenneth Van Treuren, Ph.D., professor of mechanical engineering and associate dean of research and faculty development in the School of Engineering and Computer Science at Baylor University
Tweet
May 4, 2022

WACO, Texas (May 4, 2022) – Kenneth Van Treuren, Ph.D., professor of mechanical engineering and associate dean of research and faculty development in the School of Engineering and Computer Science at Baylor University, has been honored as the 2022 Cornelia Marschall Smith Professor of the Year.

“We do the things we do because we love being at Baylor and being a part of the Christian mission,” Van Treuren said. “Teaching is very important to me, but so is research and the service opportunities that we have at Baylor and beyond. While these are important in my life, impacting students and preparing them for the future is what really brings me joy. I am privileged to be around great students, faculty and staff, which makes what I do even more rewarding.”

Nominations for the award come from all faculty, students and alumni, and Van Treuren was chosen by a committee of four faculty members and the vice provost for faculty affairs. He received a commemorative plaque and a cash award of $20,000 and will present a lecture on his chosen topic in the upcoming academic year.

Van Treuren earned his B.S. in Aeronautical Engineering from the U.S. Air Force Academy in 1977, studying gas turbine propulsion. He was then awarded a Guggenheim Fellowship to study hydrocarbon combustion for his M.S. in Engineering at Princeton University.

After serving 10 years as a U.S. Air Force pilot in KC-135 and KC-10 aircraft, Van Treuren completed his D.Phil. in Engineering Sciences at the University of Oxford, United Kingdom, in gas turbine impingement cooling. He then returned to the USAF Academy to teach heat transfer and propulsion systems until his military retirement in 1998.

Van Treuren then joined Baylor’s School of Engineering and Computer Science, where he teaches courses in fluid mechanics, energy systems, propulsion systems, heat transfer and aeronautics. His research interests include renewable energy, small wind turbine aerodynamics and noise generation as it applies to the urban environment. Currently, he designs small Unmanned Aerial System propellers, reducing noise and power requirements. Throughout his career, Van Treuren has been active in professional societies, serving as committee chairs and organizing sessions in the American Society for Engineering Education (ASEE), American Society of Mechanical Engineers (ASME) and American Institute of Aeronautics and Astronautics (AIAA).

“We received dozens of letters from current or former students testifying to the impact that he had made on their lives. A consistent theme is simply the extraordinary commitment of time and energy that he invests in the students,” Bennighof said.

Van Treuren was a pioneer at Baylor in sponsoring undergraduate research and has received hundreds of thousands of dollars in funding to enhance students’ ability to learn effectively about their discipline and its relationship to societal needs. He has won several awards for outstanding service in his discipline and consistently served in his local church in leadership and on the worship team and in the wider Waco community, including helping to nurture student interest in engineering.

Van Treuren also has received a number of Baylor’s awards for teaching, including Outstanding Faculty Awards for outstanding teaching as a non-tenured faculty member and again as a tenured faculty member. He is regularly called on to lead faculty colleagues in programs to enhance teaching. In addition, he has produced more than 130 articles, book chapters and conference papers and been awarded hundreds of thousands of dollars in external grant funding for engineering research.

“Teaching has always been my passion and it is what initially attracted me to Baylor. To teach in a Christian environment, to be who I am in the classroom, is truly a privilege that I don’t take for granted,” Van Treuren said. “To have witnessed the growth of research at Baylor has been amazing. Reaching R1 status as a university and to do it so quickly is truly God’s blessing. To learn new things about God’s creation is exciting and humbling. Engineers make things and solve challenges so that we can improve peoples’ quality of life. Who wouldn’t want to be a part of that?”

Baylor University is a private Christian University and a nationally Research 1 institution. The University provides a vibrant campus community for more than 20,000 students by blending interdisciplinary research with an international reputation for educational excellence and a faculty commitment to teaching and scholarship. Chartered in 1845 by the Republic of Texas through the efforts of Baptist pioneers, Baylor is the oldest continually operating University in Texas. Located in Waco, Baylor welcomes students from all 50 states and more than 90 countries to study a broad range of degrees among its 12 nationally recognized academic divisions.

ABOUT THE SCHOOL OF ENGINEERING AND COMPUTER SCIENCE AT BAYLOR UNIVERSITY

Baylor’s School of Engineering and Computer Science (ECS) has been preparing its students for more than 25 years as innovators for worldwide impact by training graduates for professional practice and responsible leadership with a Christian view. Students can choose from majors including bioinformatics, computer science, electrical and computer engineering, general engineering and mechanical engineering. ECS also offers graduate programs in all areas of study within the School. We stand out from the crowd through Christian commitment, a strong community, expert accessibility, leading practical experience and teamwork. Visit baylor.edu/ecs to learn more and follow on Facebook at facebook.com/BaylorECS and on Instagram at @Baylor_ECS.