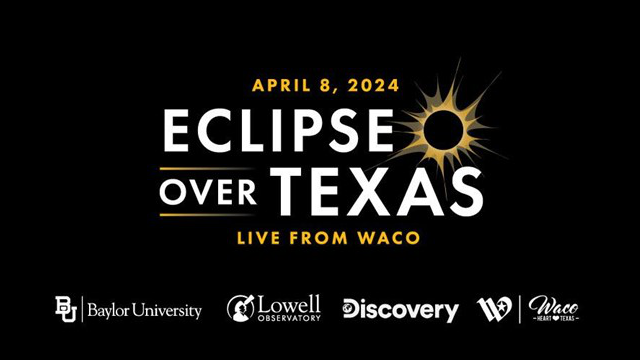 WACO, Texas (April 8, 2022) – A total solar eclipse will take place on April 8, 2024, and Texas is an ideal location for viewing this rare celestial display. Lowell Observatory is teaming with the City of Waco, Baylor University and Discovery on a public event, Eclipse Over Texas 2024. This will include an onsite celebration at Baylor University’s McLane Stadium in Waco, as well as virtual programming that people around the world may view.

“If you missed experiencing totality during the 2017 Great American Eclipse, you have another chance in 2024 to see for yourself the silvery filaments of the solar corona emanating from the velvet hole in the sky that is left when the Moon fully eclipses the Sun,” said Dr. Danielle Adams, Chief Marketing and Revenue Officer at Lowell Observatory.

Eclipse Over Texas: Live from Waco will consist of presentations by astronomers and science educators, interactive activities, and safe telescope viewing of the Sun as it progresses through the eclipse. The partial phase of the solar eclipse will begin at 12:20 p.m. CDT, as seen from Waco, Texas. The Sun’s surface will gradually be covered until totality begins at 1:38 p.m. CDT. This will last for four minutes and 13 seconds, after which the Sun will begin its gradual move out of the Moon’s shadow, ending at 2 p.m. CDT.

Discovery will broadcast the event on their linear and digital networks.

“There is nothing like the collective experience of a moment like this to bring the world together. It’s important to document these times to capture the feeling for years to come,” said Scott Lewers, Executive Vice President of Multiplatform Programming, Factual & Head of Content, Science. “Discovery is excited to collaborate with Lowell Observatory, the City of Waco and Baylor University to bring this moment in time to people around the world.”

Waco sits very close to the middle of the path of totality. This, combined with historically excellent weather in April, as well as easy accessibility, makes Waco an ideal location for an eclipse event. “The City of Waco looks forward to welcoming our residents and visitors in joining us in experiencing the 2024 total solar eclipse,” said Dillon Meek, Mayor of the City of Waco. “Waco offers numerous amenities and activities, and we encourage those participating in this historic event to make it a long weekend and enjoy all that Waco has to offer.”

Eclipse Over Texas: Live from Waco activities will take place on the South Plaza and Touchdown Alley areas of Baylor University’s McLane Stadium, which is located on the banks of the Brazos River. Here, event participants will enjoy an unobstructed view of the Sun in the sky.

Members of Baylor University’s Department of Physics will share this experience with local and international communities by hosting teacher training workshops and a scientific conference leading up to the April 8, 2024, event.

Dr. Barbara Castanheira-Endl, Baylor Senior Lecturer of Physics, notes, “As a professional astronomer, I find that looking at stars through world-class telescopes can’t approach the visceral experience of gazing at our Sun as it is eclipsed by the Moon.”

Lowell Observatory astronomers have long studied the Sun, and observatory scientists and educators hosted a similar event in Oregon for the 2017 total solar eclipse. Lowell Observatory Director Dr. Jeffrey Hall, himself a solar astronomer, said, “A total solar eclipse is an amazing—even life-changing—experience for anyone who witnesses it, and part of Lowell's mission is to communicate the excitement and wonder of events like this to everyone.” He continued, “We are very pleased to be collaborating with the City of Waco, Baylor University, and Discovery to enhance everyone's enjoyment of this spectacular event.”

We can see total solar eclipses thanks to two phenomena: the orbital motions of the Earth and the Moon, and a cosmic coincidence that renders the Sun and Moon to appear similar in size as seen from Earth.

Solar eclipses can only happen during the new phase of the Moon, when the Moon lines up between Earth and the Sun. If the three bodies are not quite aligned, then the Moon may block part of the Sun in what is called a partial solar eclipse. If the three are perfectly aligned, then the Moon can completely cover the Sun, creating a total solar eclipse. However, because the distance between the Moon and Earth varies, the Moon will sometimes appear a little larger or smaller than its average size. Occasionally, even when the three bodies are perfectly aligned, the smaller-than-usual Moon won’t completely block the Sun, leaving a ring, or annulus, of the Sun showing. This is known as an annular eclipse.

There is more to the story, and in order to understand it, a look at one of space’s curiosities is necessary. The Sun has a diameter about 400 times greater than that of the Moon, but it also happens to be 400 times further from Earth than the Moon. This means that the two bodies, as seen from Earth, appear to be about the same size. If the Moon was farther away from Earth, then it would appear smaller and could never completely cover the Sun. In that case, total solar eclipses wouldn’t be visible from Earth; the best we could hope for would be annular ones. This will eventually become the case; with the Moon moving away from Earth at a rate of 1.5 inches per year (about the same rate that our fingernails grow), in several hundred million years it will be too small to completely block the Sun.

Lowell Observatory is a private, non-profit research institution founded in 1894 by Percival Lowell. The Observatory has been the site of many important discoveries including the detection of the large recessional velocities (redshift) of galaxies by Vesto Slipher in 1912-1914 (a result that led ultimately to the realization the universe is expanding), and the discovery of Pluto by Clyde Tombaugh in 1930. Today, Lowell's astronomers use ground-based telescopes around the world, telescopes in space, and NASA planetary spacecraft to conduct research in diverse areas of astronomy and planetary science. The Observatory welcomes nearly 100,000 visitors each year to its Mars Hill campus in Flagstaff, Arizona for a variety of tours, telescope viewing, and special programs. Lowell Observatory currently operates four research telescopes at its Anderson Mesa dark sky site east of Flagstaff and the 4.3-meter Discovery Channel Telescope near Happy Jack, Arizona. For more information, please visit lowell.edu.

Baylor University is a private Christian University and a nationally ranked Research 1 institution. The University provides a vibrant campus community for more than 20,000 students by blending interdisciplinary research with an international reputation for educational excellence and a faculty commitment to teaching and scholarship. Chartered in 1845 by the Republic of Texas through the efforts of Baptist pioneers, Baylor is the oldest continually operating University in Texas. Located in Waco, Baylor welcomes students from all 50 states and more than 90 countries to study a broad range of degrees among its 12 nationally recognized academic divisions. For more information, visit baylor.edu.

About the City of Waco

Known for being a great place to live and work, the City of Waco provides many economic opportunities and cultural experiences. A city centrally located the heart of Texas on the I-35 corridor midway between Dallas-Fort Worth and Austin, Waco is a progressive and diverse city with a vibrant community spirit offering major attractions, museums, recreation, and shopping. The 25th largest city in Texas and the county seat of McLennan County, Waco is also the birthplace of Dr Pepper, the Texas Ranger Hall of Fame and Museum, and the Texas Sports Hall of Fame. A highlight of the community is the iconic Waco Suspension Bridge, spanning the beautiful Brazos River. The bridge is near the entrance to Cameron Park, over 480 acres of a unique municipal park located in the heart of the city. The City of Waco also boasts the award-winning Cameron Park Zoo and Waco Mammoth National Monument and hosts numerous annual events. Waco is home to two of Waco’s most highly visited sites in the Magnolia Market at the Silos and Magnolia Table. For more information, see waco-texas.com.

Discovery Channel is dedicated to creating the highest quality non-fiction content that informs and entertains its consumers about the world in all its wonder, diversity and amazement. The network, which is distributed to 88.3 million U.S. homes, can be seen in 224 countries and territories, offering a signature mix of compelling, high-end production values and vivid cinematography across genres including, science and technology, exploration, adventure, history and in-depth, behind-the-scenes glimpses at the people, places and organizations that shape and share our world. For more information, please visit www.discovery.com.