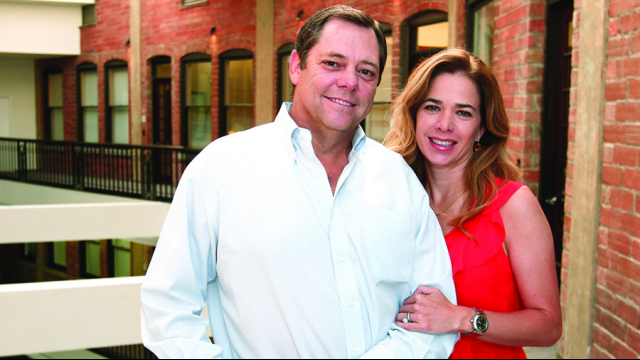 Established in 1969, the Founders Medal is one of the most distinguished awards given by Baylor and is reserved for men and women whose service and contributions have been unusually significant to the life and future of the University. Paul and Alejandra Foster have helped to shape the future of Baylor University, as well as Baylor’s physical campus, through their gifts and through their service as co-chairs of the Give Light Campaign’s National Steering Committee. The Gift Light Campaign is the largest fundraising campaign in Baylor’s history, aimed at undergirding the aspirations of Illuminate, Baylor’s strategic plan.

“Paul and Alejandra share a commitment to excellence in higher education and a love for Baylor University,” said Baylor President Linda A. Livingstone, Ph.D. “You can see the impact of their giving spread across campus, with each gift to scholarships, faculty endowment, student success programs or the buildings bearing their names, telling the story of their commitment to the support and success of our Baylor students. Their philanthropy has shaped the trajectory of this institution as they have shared Baylor’s vision and implementation of Illuminate. Their leadership and service have truly contributed in significant and transformational ways, and we are grateful for their philanthropy.”

"Paul and Alejandra represent the best of what we hope each of our 500+ student-athletes will become: leaders in their community who use their resources and service to support and benefit others in transformational ways," said Mack B. Rhoades IV, Baylor Vice President and Director of Intercollegiate Athletics. "With their love of Baylor and Baylor Athletics, they have helped to shape Baylor's campus and enrich the Baylor experiences of our students, student-athletes and Baylor fans in incredible ways. Paul and Alejandra wholly embody our core vision of Preparing Champions for Life. They are truly deserving of this honor, and we are grateful for their vision and commitment to invest in our university continually."

On May 4, 2019, Baylor announced a then-anonymous gift of $100 million from Paul and Alejandra Foster. The largest current gift ever received by Baylor University, the gift sparked unprecedented support for faculty through the creation of a dollar-for-dollar matching program for qualifying gifts providing faculty support to Baylor. Now known as the Foster Academic Challenge, the program prompted the funding of 14 faculty endowed chairs, supporting such varied initiatives and areas of study as Materials Science, Business, Health, Entrepreneurship, Communication Sciences and Disorders, Biochemistry, Biomedical Engineering and Food Security. The Foster Academic Challenge generated annual support for faculty chairs equivalent to $50 million in endowment. The Fosters’ gift also provided significant momentum in for the Give Light Campaign’s priority capital projects. In November, the University named the Paul and Alejandra Foster Pavilion in recognition of their transformational support.

On December 21, 2021, Baylor University and the City of Waco announced an initial partnership agreement to construct the Foster Pavilion in the highest visibility area of the city’s growing riverfront. Planned as a state-of-the-art home for the men’s and women’s basketball teams, the Foster Pavilion will be located along the Brazos River on the west side of Interstate-35 adjacent to the University’s Clifton Robinson Tower. The groundbreaking for the project is expected to begin in June 2022 with an early opening of the pavilion targeted for January 2024.

A Legacy of Impact

This historic gift is not the first area of Baylor’s campus to be shaped by Paul and Alejandra Foster. In 2013, they gave a $35 million gift, which at the time was the largest gift from a living alumnus in Baylor’s history, to name the Paul L. Foster Campus for Business and Innovation. At the time, Paul said he hoped his gift, a portion of which also provided support for McLane Stadium, would inspire others to support the Hankamer School of Business’s new home. The Paul L. Foster Success Center also bears his name in recognition of Paul’s significant contributions to student support services.

Paul L. Foster is the founder and CEO of Franklin Mountain Investments LLC (FMI) and its affiliated companies. FMI is a diversified investment and operating company with holdings in the real estate, energy, private equity, construction, aviation, sports, medical devices and hospitality industries. He also serves as a director on the boards of Franklin Mountain Investments LLC and its affiliates, and is on the boards of Jordan Foster Construction, Vomaris Innovations and WestStar Bank. He also serves as a Member of the Texas Parks and Wildlife Commission and is on the Board of Trustees of Baylor College of Medicine. In 2021, Paul was named Chairman of the Board of the Electric Reliability Council of Texas (ERCOT). He serves on the Executive Committee of the Borderplex Regional Economic Alliance and is a member of the World Presidents Organization.

Alejandra De la Vega-Foster is Vice President and serves on the Board of Almacenes Distribuidores de la Frontera, a company that operates over 300 convenience stores in the City of Juarez and northern Chihuahua, Mexico. She also owns the Domino’s Pizza franchise in Juarez. Alejandra is also co-owner and President of Franklin Mountain Franchise Ventures LLC, a company that operates, among other businesses, franchise rights for La Madeleine Country French Café in El Paso, Texas, southern New Mexico and Arizona markets.

From October 2016 to September 2021, Mrs. De la Vega-Foster served on the Governor’s Council as the Cabinet Secretary of Innovation and Economic Development for the State of Chihuahua, Mexico. She is also co-owner and serves as a member of the Board of Directors of MountainStar Sports Group LLC, and is a co-owner and the President of the Board of Directors of FC Juarez, a Liga MX (Mexican Division 1A) soccer franchise playing in Ciudad Juarez as Los Bravos. She serves on the MD Anderson Cancer Center Board of Visitors and is a Co-Chair of the Borderplex Regional Economic Alliance. She is a member of the Young Presidents Organization, Paso del Norte Chapter.

The Fosters have received numerous honors at Baylor University, including the Baylor Legacy Award and the Baylor University Distinguished Alumni Award. They have been honored for their faithful support of Baylor as Legacy Members of the 1845 Society. From 2008-2010, Paul served on the Board of Advisors for Baylor's Hankamer School of Business. He is a current member of the Baylor Bear Foundation.

Baylor University is a private Christian University and a nationally ranked Research 1 institution. The University provides a vibrant campus community for more than 19,000 students by blending interdisciplinary research with an international reputation for educational excellence and a faculty commitment to teaching and scholarship. Chartered in 1845 by the Republic of Texas through the efforts of Baptist pioneers, Baylor is the oldest continually operating University in Texas. Located in Waco, Baylor welcomes students from all 50 states and more than 90 countries to study a broad range of degrees among its 12 nationally recognized academic divisions.