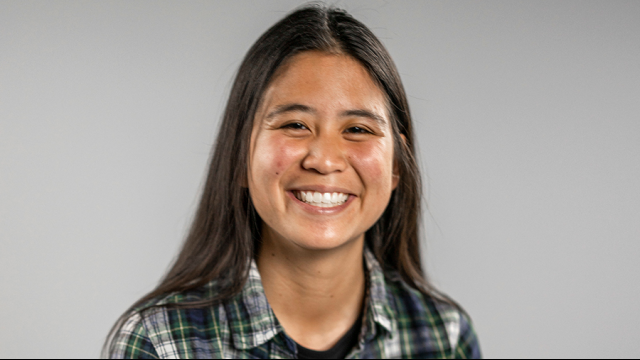 WACO, Texas (Jan. 20, 2022) – Baylor University senior chemistry major Kate Rojales of Milton, Georgia, is among 18 recipients of the prestigious Churchill Scholarship in mathematics, science and engineering, announced by the Winston Churchill Foundation of the United States. Rojales, who conducts research as an undergraduate in inorganic chemistry, is the second Churchill Scholar in just two years of the University being a participating institution in the program.

“I applied to the Churchill Scholarship because I have always wanted to study and research abroad, which is why I was first interested in these major fellowships after I graduated,” Rojales said. “As a scientist, I am excited to explore bioinorganic chemistry for the first time, bridging my research interests in proteins and transition metal complexes before my Ph.D. This is truly a once-in-a-lifetime opportunity to conduct research in a world-class institution, immerse myself in a new culture, and meet, live and work alongside people from around the world.”

The Churchill Scholarship provides funding to American students for a year of master’s study at Churchill College in the University of Cambridge. The program was set up at the request of Sir Winston Churchill to fulfill his vision of U.S.-UK scientific exchange with the goal of advancing science and technology on both sides of the Atlantic, helping to ensure future prosperity and security. For the 18 Churchill Scholarships, the Churchill Foundation received 125 nominations from 80 participating institutions, among the highest in the history of the competition.

Rojales's Churchill Scholarship will cover full tuition, a stipend, travel costs and the opportunity to apply for a $2,000 special research grant at Cambridge. She will pursue a Master of Philosophy in chemistry with a project focused on the synthesis and reactivity of novel artificial metalloenzymes under Cambridge professors, Dr. Paul Barker and Dr. Sally Boss.

Rojales also won a 2021 Goldwater Scholarship, one of the most prestigious undergraduate scholarships given in the natural sciences, engineering and mathematics that encourages outstanding students to pursue careers in STEM fields. She decided to come to Baylor after attending the University’s Invitation to Excellence — a competitive program for high-achieving students that showcases many of the exciting academic opportunities Baylor offers.

“That experience helped me realize that meaningful undergraduate research is a thriving reality at Baylor, not just a wish or dream,” Rojales said.

In May 2020, Baylor made an appeal to the Winston Churchill Foundation that the University should join the ranks of its elite participating institutions, which would make Baylor students eligible to apply for the Churchill Scholarship. The Churchill Foundation invited, then accepted, the University's formal proposal, which trumpeted Baylor’s advancement in research and undergraduate achievement, said Andrew P. Hogue, Ph.D., associate dean for engaged learning at Baylor.

"First author on a manuscript published in Inorganic Chemistry, a journal ranked consistently in the top 10 globally in the field, and another just submitted for publication in Organometallics, Ms. Rojales has demonstrated that she is, in fact, a world-class researcher. Building on her work at Baylor, she will arrive at Cambridge with experience, savvy and momentum that will help her maximize her Churchill year, producing at a level that will delight her mentors and make the Winston Churchill Foundation proud—just as we are at Baylor—of its association with a scientist and a human being of Ms. Rojales’s caliber," Hogue said.

Rojales — a chemistry major, but also a member of Baylor’s Honors Program and pursing minors in Great Texts and religion — chose to attend Baylor because of the caring community commitment to the Christian faith and excellence in undergraduate research. Her time at Baylor coincides with the University's achievement of Research 1 recognition among the nation’s top-tier research institutions and as preeminent Christian research university.

“The truth is that research acumen is only one part of Ms. Rojales. She has pursued a varied curriculum at Baylor through which she has demonstrated excellence in the humanities and cultivated a rare ability not just to do science, but to think well about science,” Hogue said.

During her freshman year, Rojales began working with Caleb Martin, Ph.D., associate professor of chemistry, in his inorganic chemistry research lab at Baylor studying the synthesis of novel boratabenzene transition metal complexes. Rojales spent summer 2019 working for Jeffrey Urbauer, Ph.D., associate professor of chemistry at the University of Georgia, as one of only six applicants granted a spot in the Summer Undergraduate Research Opportunity (SURO) program, where she studied the purification and characterization of the G-alpha protein.

“I am beyond thankful to all who have mentored, taught, and supported me so far in my research and generally during my time at Baylor, from professors to labmates and countless others who have believed in me,” Rojales said. “I am especially grateful to my research mentors, Drs. Martin and Urbauer who have given me the opportunity to engage in undergraduate research and developed me as a researcher, as well as Dr. Tom McGrath and Dr. John Wood, who has always encouraged me in my love of chemistry.”

Under Martin, her faculty mentor, Rojales gained skills in x-ray crystallography, IR spectroscopy and new techniques in magnetic resonance spectroscopy. To combine her interests in both science and the humanities, Rojales’s Honors thesis focuses on the moral formation of scientists through the daily activities comprising scientific research and laboratory work. She is researching her thesis under the guidance of Eric Martin, Ph.D., associate professor of the history and philosophy of science and assistant director of the University Scholars Program at Baylor.

“Kate Rojales started conducting research in my laboratory in her first year and quickly emerged as a dynamic researcher. With her dedication on two substantial projects over three years in my group, Kate’s first publication just came out last month and we are putting the finishing touches on a second manuscript that will be submitted in the coming months,” said Caleb Martin. From her research endeavors, Kate has developed to an incredibly advanced level where she is able to come up with scientific ideas and troubleshoot through unanticipated hurdles in new research areas. Although I will miss working with Kate, I look forward to seeing Kate progress in her career, not only as a Churchill scholar, but beyond.”

After the Churchill Scholarship, Rojales plans to return to the U.S. to pursue a doctorate in in chemistry with the goal of becoming a professor to teach, conduct research and mentor students.

Baylor students who seek a rich – even extraordinary – undergraduate education are supported by Baylor’s Office of Engaged Learning, which partners with students, in collaboration with faculty and staff throughout the University, to help them maximize their scholarship beyond the classroom. Students are supported as they apply and compete for prestigious scholarships, fellowships, internships and research experiences at the national and international level, including the Fulbright, Churchill, Truman, Gates Cambridge, Boren and Rhodes, and for other notable awards, such as the Goldwater, Pickering, Critical Language Scholarship and National Science Foundation Research Experience for Undergraduates (REU).

“A big thanks also goes to Dr. Andy Hogue and Dr. Daniel Benyousky in the Office of Engaged Learning for connecting us with these amazing opportunities and helping us all find our voices to tell our stories. I also could not imagine my time at Baylor without the many others who have invested in me as a student, leader, and Christian outside of my research,” Rojales said.