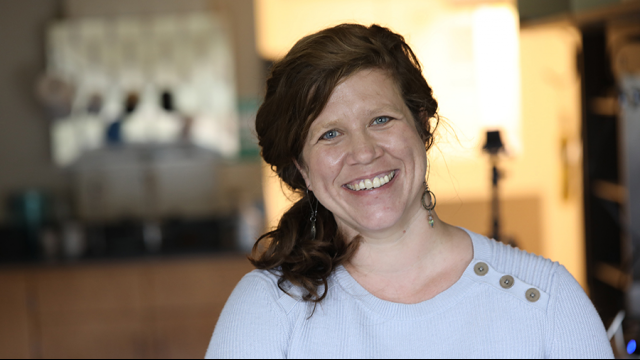 “I'm fascinated by how animals feed underwater,” Kienle said. “Mammals that have reinvaded the marine environment — whales, dolphins, pinnipeds, sea otters and polar bears — are all carnivores that have converged on the same feeding strategies when entering the water environment. You're also getting the repeated evolution of suction feeding and filter feeding. It's pretty amazing to see these independent lineages all converging on similar feeding strategies — suction feeding, biting and filter feeding.”

Kienle recently led a study, published in the Journal of Anatomy, comparing pinniped craniofacial musculature and its potential role in aquatic feeding.

“I was interested in looking at how these different facial muscles potentially play a role in different aquatic feeding strategies. I was looking at the skull morphology to see if there were morphological specializations for feeding and that automatically led to the question of what do the muscles look like?” Kienle said.

Data on the pinniped craniofacial musculoskeletal system and its function in aquatic feeding are rare. In fact, Kienle’s research provides foundational data for further studies on pinnipeds and the evolution of their functional morphology.

“The first part of the study was surprising because there was no reference material for doing these dissections. There aren’t detailed drawings of what the muscles should look like,” Kienle said. “I knew, roughly, they should have a masseter (a facial muscle that plays a role in opening and closing the jaw for chewing), but what it specifically looked like in pinnipeds wasn’t clear. The first few dissections, I didn’t know what muscles to expect besides a few general ones. For a while, we would write out a little tag that read ‘mystery muscle’ with a question mark until we figured out what it was.”

“It was interesting seeing what was present and absent in different species. I came into this study thinking that it would be pretty continuous among pinnipeds — that the species would have the same muscles present. That was not always the case,” Kienle said.

“Pinnipeds are generalists as a whole and really opportunistic, which is great for them in terms of adapting to a changing environment, which they've done in the past and are doing now,” Kienle said. “From an evolutionary perspective, you expect closely related species to be more similar than distantly related species. Maybe there are ecological pressures that are driving the muscular anatomy more so than evolutionary history.”

The researchers note that the robust facial morphology of pinnipeds allows them to switch feeding strategies depending on the environmental context. This skill would be critical to survival in varied and rapidly changing underwater habitats.

The researchers used studies of various other mammals to assist in distinguishing craniofacial muscles and their use. Existing data on mammalian craniofacial musculature, beyond humans, was also difficult to find, said Kienle.

“I find it so fascinating how little we know about the internal anatomy of these huge marine carnivores. That's the thing that surprises me the most. I was shocked how little information we have on the internal structures for mammals as a whole,” she said. “This is providing a foundational comparative study. Previous work has been really isolated and varied. This is the first study that compares multiple species to look at what is consistent and varied across all of these different in groups. I think that automatically opens the door for more research.”