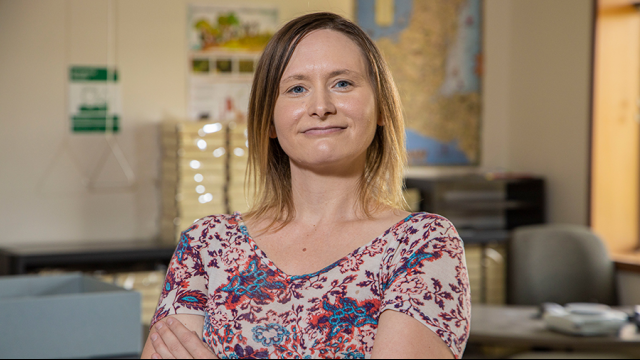 The study, published in the international journal Heritage, sought to quantify the impacts of the virus in the varied professional fields of archaeology. The collaborative team, which included researchers from the U.S., U.K. and Belize, developed a survey that asked respondents questions related to job loss; economic, workload, research and training impacts; and changes in personal responsibilities.

“My colleagues and I decided to do this study since we were personally impacted by the pandemic and had been hearing anecdotal accounts of archaeologists who had been negatively impacted. We were curious just how widespread career impacts were and if they were concentrated among certain groups of the archaeological community,” Hoggarth said.

The researchers chose the survey method to get direct information from archaeologists themselves, rather than relying on professional organizations or employers.

“This helps us assess the relatively short-term impacts of the pandemic and offer some solutions to mitigating its impacts and will hopefully allow us to follow up on the survey using similar metrics in the future,” Hoggarth said.

A total of 570 archaeologists responded to the survey, representing a variety of archaeological areas, including cultural resource management, academia, museums, government agencies and more. All populations reported effects on workload due to the pandemic, with increases in workload commonly being linked to the switch to digital platforms. Research opportunities were identified as being negatively affected as archaeologists struggled to travel for fieldwork. Archaeologists who teach reported an increase in the amount of time for teaching-related activities.

“The results largely confirmed what we had been hearing anecdotally among archaeologists, especially mothers who were struggling to keep their careers going while also trying to work remotely. However, the scale of the impacts did surprise us, as did some of the personal stories that came out through the survey,” Hoggarth said.

“Early-career archaeologists were particularly worried about how they would be able to find jobs when the academic job market had already been devastated and the pandemic made it even worse,” Hoggarth said. “The economic impacts also surprised us, as we weren’t sure what to expect in terms of job losses and economic losses. Those data really drove the point home that pre-existing structural inequalities were exacerbated by the pandemic.”

Personal responsibilities, especially for parents and those with sick family members, increased due to the pandemic as well. Respondents reported inaccessibility of childcare contributed to having to devote more time to home schooling.

“We somewhat expected to find that women’s personal responsibilities had been increased, but we had no idea to what extent. My co-authors described how the time devoted to home-schooling their children or caring for sick family members was becoming nearly impossible to manage alongside full-time employment,” Hoggarth said. “The numbers of the survey verified the personal experiences of my co-authors and myself and help us to place some time values that those commitments had increased. Recognizing this work is necessary by employers, professional organizations and others in order to avoid major setbacks in the careers of parents.”

The researchers offered mitigation strategies for various employers, publishers, professional organizations and funding organizations that could lessen the long-term impacts of the pandemic in the future. Some of these suggestions are simple — such as acknowledging caregiving activities on professional academic resumes and developing personalized promotion guidelines based on individuals’ impacts. Other suggestions are more ambitious and focus on trying to fix the structural inequalities in the field— such as increasing diversity in representation on decision-making boards or roles — that have been exacerbated by the pandemic, Hoggarth said.

“Our suggested mitigation strategies are focused on trying to reach out to various institutions and organizations and show them the real impacts of the pandemic on archaeologists. Without giving hard data on these impacts, we fear that the field of archaeology will suffer as it loses those heaviest impacted groups,” she said. “This would set the field back decades. Therefore, we offer some suggestions that aid trying to prevent those impacted archaeologists from giving up on the field of archaeology or being so negatively impacted that they suffer irreparable damage.”