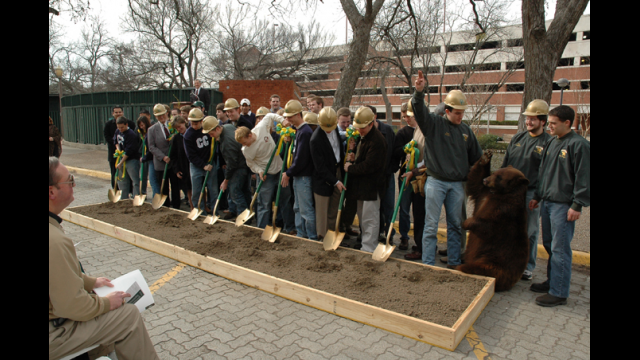 Baylor Chamber members past and present, along with Joy, one of Baylor's bear mascots, break ground on the Bill and Eva Williams Bear Habitat Complex.
Tweet
Feb. 4, 2005


Watch the groundbreaking ceremony via streaming video at BaylorTV.com.


Click here for a photo feature from the groundbreaking ceremony.

Baylor University broke ground Feb. 4 on the Bill and Eva Williams Bear Habitat Complex, a visible commitment to maintaining the tradition of Baylor's bear mascots, while providing a home for them more similar to their natural environment.

The ceremony, held at the site of the current Bear Plaza along Waco Creek, was attended by hundreds of members of the Baylor family, including the Williams family, who gave the lead gift for the project, Baylor Chamber members past and present, longtime Chamber adviser Robert Reid, and of course, Joy, one of Baylor's two North American Black Bear mascots.

"The Williams family caught the vision for the full scope of this project," said Baylor President Robert B. Sloan Jr. "They saw it as a way to foster unity among Baylor students and alumni and to bring the Baylor family together while improving the facility for one of our most beloved traditions."

"The current Bear Plaza is one of the most visited sites on campus and provides an educational experience for area schoolchildren, students, alumni and others," Sloan added. "This habitat will better serve the needs of our mascots and will better accommodate visitors to the habitat."

The popular on-campus Bear Plaza, which is home to Joy and her sister, Lady, will stay in its present location along Waco Creek. The existing site will be completely renovated, with additional square footage increasing the bears' current living space while providing a home more similar to their natural habitat.

The Williams Bear Habitat Complex will include:

• play area for the bears consisting of a waterfall and den

The current facility is designated as a Class C specialty zoo and educational exhibit and is licensed by the U.S. Department of Agriculture and approved by the Texas Parks and Wildlife Department to hold up to three bears.

Bill and Eva Williams and their children, Michelle, a Baylor senior, and Preston, a Baylor freshman, announced a lead gift to the Bear Habitat expansion project in May. The Williams, both Baylor graduates, said they believe it is critical for the university's live mascots to have the best facility possible for both the well-being of the bears and for the many visitors to Baylor's campus, who often get their first impression of the university at the bear facility.

"When I first stepped on the Baylor campus as a freshman, I was so impressed by the bears. That was a great part of the college experience at Baylor and one that many universities don't have," said Bill Williams, chairman, president and CEO of Scottsdale-based Medcom USA, a leading provider of healthcare/financial transaction solutions for the healthcare industry.

"When the opportunity came up about the Bear Habitat, we talked about it as a family because we all know what the Baylor Bears mean to the life of Baylor, and we decided to do something to help out," Williams said.

In addition to the Williams's gift and a $50,000 commitment from the 2004 Baylor/Waco Foundation campaign, more than 275 donors gave to the project, according to Cathy Pleitz, campaign coordinator for the Bear Habitat expansion.

"The gifts ranged from very large gifts to loose change in the collection box, and the donors are alumni, parents, students and community members," Pleitz said. "The reasons for giving were varied, but the combined generosity made this day possible."

Sloan also recognized current and past Chamber members who, in a seven-month period, raised the remaining funds needed to make the project a reality.

"Throughout Chamber's history, the organization has been known to step forward and raise funds for projects that promote the spirit and unity of our campus," Sloan said. "Assisting with the Bear Habitat campaign is just one more example of their service to the university."

Pleitz said that donors exceeded the campaign's $950,000 goal by more than $100,000. Those funds will be used toward an endowment for the bear program, she said.

The bears' current home was built in 1976 as the Steve Hudson Memorial Bear Plaza. During the ceremony, Sloan spoke about the Hudson family, who gave the initial gift to fund the current Bear Plaza in memory of their son.

"The Hudson family did a remarkable job with the Bear Plaza, and the Williams family wanted to help build on that tradition by expanding the facility even further," Sloan said.

Sloan also announced that the waterfall in the new complex will be named in honor of Scott Adams, a Chamber member who was killed in an accident during Diadeloso in 1990. The waterfall project has been supported by several friends and family members of Adams, Sloan said.

In 1914, the student body voted by overwhelming majority to adopt the North American black bear as the university mascot. The first live bear, nicknamed Bruin, arrived on campus in 1917 to take his place as Baylor's official mascot. Over the last eight decades, the bears have become a beloved symbol of Baylor spirit and life for students, staff, faculty, alumni and friends.

"Since the first bear came to Baylor nearly 90 years ago the bears have enjoyed many homes here, however none of them would top the facility we are breaking ground on here today," said bear trainer Charles Lucenay, a senior telecommunication major from Dallas.

"The new habitat will allow us to more accurately simulate a bear's life in the wild as well as provide us with many new forms of enrichment. It will be fascinating to see Joy and Lady as they adapt to their new environment," Lucenay said. "As with all the other building projects of the past few years this, too, will be done first class and will be a habitat that all can be proud of."

Several groups took part in the official groundbreaking, including current and former Chamber members, regents, members of the Bear Habitat steering committee and Joy, who pawed at the dirt while digging for peanuts.