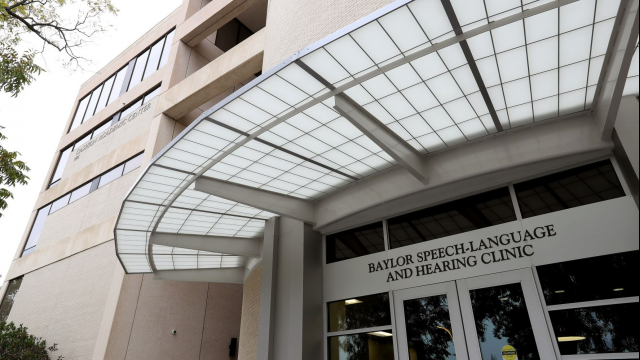 WACO, Texas (Sept. 9, 2021) – Baylor University today announced the creation of The Vance Masteller Endowed Research Chair in Communication Sciences and Disorders within the Robbins College of Health and Human Sciences’ Department of Communication Sciences and Disorders. Since the start of the Give Light Campaign, the University’s comprehensive philanthropic campaign, the department has received significant programmatic support, with greater resources created to support the work and research surrounding Autism Spectrum Disorders (ASD).

The Vance Masteller Endowed Research Chair in Communication Sciences and Disorders was funded through an anonymous $1.5 million gift, which will be matched through the Baylor Academic Challenge initiative and will provide significant research and teaching support in ASD and to advance the Health initiative within Illuminate, the University’s strategic plan. The Vance Masteller Chair will help to attract and retain a leading scholar researcher who will serve as a leader for the department’s new Autism Clinic, which is part of the recently announced expansion of the Baylor Speech-Language and Hearing Clinic. The donors of the gift are Baylor alumni.

“Endowment support for Baylor’s faculty provides transformational, long-term impact within our academic programs and departments, and I am grateful for the generous gift these Baylor alumni have made to position the Department of Communication Sciences and Disorders for future success and growth,” said Baylor President Linda A. Livingstone, Ph.D. “At the heart of this gift is a genuine desire to advance Baylor’s mission and ensure that this nationally recognized program has the resources and endowment needed to conduct research and educate future practitioners at the highest levels of excellence.”

The Vance Masteller Chair will provide support as Robbins College begins a $2.5 million expansion of the Speech-Language and Hearing Clinic to create an Autism Clinic, with facilities and research space dedicated to the study of Autism Spectrum Disorders. The expansion, which was announced in March, will create nearly 12,500 square feet of new and remodeled space, doubling the capacity for providing services to individuals with ASD.

These most recent gifts to the Department of Communication Sciences and Disorders punctuate a season of significant growth that began in 2015 with a $10 million commitment to the department, which created an endowed chair to lead CSDand provided a blueprint for strategic growth moving forward. The gift also allowed the department to relocate to the Hankamer Cashion Academic Complex in 2016, funding the renovation of classroom space, technology and creating a new home for the Speech-Language and Hearing Clinic, the professional clinical division of the department, which provides community service hours each year to speech-language and hearing-impaired children and adults of all ages.

Building upon this success in 2018, the Waco Scottish Rite Charitable Foundation provided a $1.6 million gift, endowing Baylor’s Camp Success and building off a 15-year partnership between the department and members of the Waco Scottish Rite Bodies, who had provided annual underwriting for the language and literacy intervention program. The endowment ensured the continued impact of the camp, as well as raising awareness of the value of the community outreach and its availability to Central Texas children.

“The past six years have been a time of tremendous growth and advancement for the Department of Communication Sciences and Disorders,” said Baylor Provost Nancy Brickhouse, Ph.D. “I am grateful for the many alumni, community partners and friends who have given generously to grow the resources of this incredible department, providing faculty with the research spaces and laboratories necessary not only to further academic discovery, but to prepare students to become practitioners who can provide elite care and support for the adults and children diagnosed with ASD and other speech, hearing and language challenges. I am grateful for our Baylor Family who have truly chosen to create an enduring legacy of support, of transformation in higher education through their generous gifts to Baylor CSD.”

A legacy of service

The Vance Masteller Chair is named after Lawrence Vance and Rod Masteller, both of whom were inspirational to the donors establishing the endowed position. Lawrence Vance graduated from Baylor in 1927 with his Bachelor of Arts degree and again in 1929, when he received his Masters of Arts degree.  He met and married a local Waco woman, Ruth Blystone, and they were married 68 years. For the next decade during the Great Depression, Lawrence supported his family with many occupations. He was an ordained Baptist minister who preached in small churches on weekends; he owned a grocery store; and he farmed and taught school. During this time, he also studied law independently at night, eventually passing the Texas Bar and practicing insurance law for over 40 years. According to his family, four subjects dominated his conversations: Jesus, his family, Wilshire Baptist Church in Dallas, where he was a charter member and deacon, and Baylor University. His love for those who needed compassion was legendary, and his friends cannot recall a conversation that did not include Baylor University. In the 94 years since his initial graduation, three generations of his family have attended Baylor University, and the fourth generation already knows the Fight Song. In honor of his compassion and deep love for Baylor, this chair holds his name.

Rodney “Rod” Masteller was a beloved Southern Baptist leader who served for more than 50 years as a pastor. His first full-time pastorate was at Westwood Baptist Church in Waco, and he would eventually lead congregations in many southern states, including Oklahoma and Louisiana. Rod met and married his wife of 53 years, Linda, at Southwest Baptist University. Rod loved Jesus and introduced thousands to his Lord, including one of the donors of The Vance Masteller Chair. According to his family, he had “an amazing gift of encouragement and a call to mentoring,” which he used to minister to others throughout his career, including two terms as president of the Oklahoma and Louisiana State Southern Baptist Conventions. Rod is remembered by his family and friends as a gifted pastor who loved his family as much or more than the congregations he served. His love for his family and his dedication to mentorship continued to the end of his life, as he battled the COVID-19 virus. Throughout his life, Rod maintained a respect for Baylor University, welcoming one son-in-law alumnus into his family. One of his granddaughters joined the University as a freshman this fall. In honor of his commitment to his faith and Jesus Christ, and in recognition of his encouragement and willingness to help others, the donors have established this chair that bears his name.

The Vance Masteller Chair supports the Give Light Campaign, which undergirds Illuminate and will impact every aspect of campus life – academics, athletics, student life and service learning – while also bolstering financial support for students and for the priorities of Baylor’s 12 colleges and schools. The chair is the 13th endowed faculty position created through the Baylor Academic Challenge in the past two years and the first established within Robbins College.

A significant portion of the $100 million gift created a matching fund to launch the Baylor Academic Challenge, which will maximize Baylor's investments in promising research and academic programs by matching dollar-for-dollar significant additional gifts from other donors, fueling the University's academic enterprise. The program seeks to increase the number of endowed faculty positions, helping Baylor generate additional funding to sustain and grow teaching and research in key areas. Another portion of the $100 million gift provided the lead investment in the Baylor Basketball Pavilion, a state-of-the-art $105 million facility that will become the new home of the men's and women's basketball teams.

ABOUT ROBBINS COLLEGE OF HEALTH AND HUMAN SCIENCES AT BAYLOR UNIVERSITY

The Robbins College of Health and Human Sciences at Baylor University was established in 2014, a result of identified priorities for strengthening the health sciences through Baylor’s strategic vision, Pro Futuris, and the University’s Illuminate strategic plan. The anchor academic units that form Robbins College – Communication Sciences and Disorders; Human Sciences and Design; Health, Human Performance and Recreation; Occupational Therapy; Physical Therapy; Public Health; and Division of Health Professions – share a common purpose: improving health and quality of life. The College’s curricula promotes a team-based approach to transformational education and research that has established interdisciplinary research collaborations to advance solutions for improving quality of life for individuals, families and communities. For more information, visit baylor.edu/chhs.