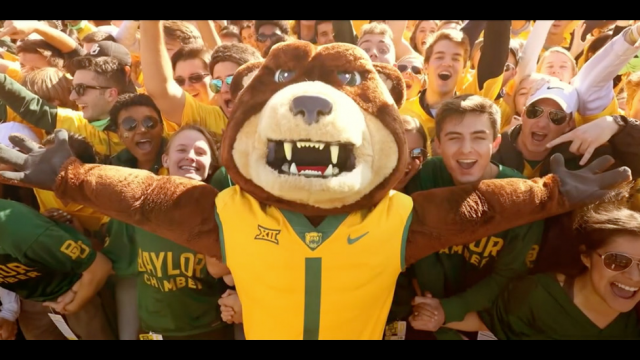 The 30-second commercial, titled “Let There Be Light,” is an extension of the University’s “Where Lights Shine Bright” brand campaign and features scenes of campus life paired with couplets that paint a picture of the vibrant, active campus experience – supported by a caring Christian community – that prepares Baylor students to shine as leaders and servants in the world.

“Baylor’s Lights Shine Bright campaign has been especially meaningful during the past 18 months as we all have dealt with the challenges of COVID-19,” said Jason D. Cook, Baylor’s vice president for marketing and communications and chief marketing officer. “‘Let There Be Light,’ the theme of this year’s commercial, calls us back to those experiences and relationships that bring us hope and joy as part of the Baylor Family.”

The visual story is further enhanced through the music of Nashville-based Christian duo, Apollo LTD. Known for their exuberant, 80s and 90s-infuenced sound, the group’s recent release, “Sunday Morning Feeling,” provides the soundtrack for the commercial.

College roommates and writing partners for years before stepping in front of the microphone in 2015, Jordon Phillips and Adam Stark of Apollo LTD were inspired in naming the group by Phillips’ uncle, a NASA astronaut in the 1990s. The musicians, like the Apollo program, had a desire to do something never done before.

“We are honored to partner with Baylor University for their new commercial using our song ‘Sunday Morning Feeling,’” Phillips said. “We wrote that song to bring light to all who heard it and are excited to see it come to life for Baylor. We are also looking forward to having the opportunity to play for their students in the coming months.”

The date for Apollo LTD’s concert debut on the Baylor campus will be announced in the near future.

The commercial was directed by Dallas-based Norry Niven, whose work has reached millions for global brands such as Gatorade, Ford, Lincoln, McDonald’s, HBO, Showtime, Disney and Visa. He is recognized nationally for his creativity and dynamic visual effects, winning six Emmys as well as multiple Addys, AICP and CLIO awards.

Produced in partnership with Johnson & Sekin, the University’s Dallas-based advertising agency of record since fall 2017, the commercial was shot on Baylor’s campus using 23 current students and faculty.

Named to Ad Age’s “Best Places to Work” in 2018 and 2019, Johnson & Sekin is one of Dallas’ most awarded and talked-about advertising agencies. Their work has been recognized by the American Advertising Federation, American Marketing Association, Lüerzer's Archive, Hermes Creative, Texas Monthly and the National Down Syndrome Society.

“Shining a light on the Baylor experience through the eyes of our students is one of the best ways to introduce prospective students and families to this remarkable university. There are so many stories to tell, and we continually look for new and interesting ways to present an authentic picture of who we are as a university and who these students will become as they find and follow their callings here,” Cook said.

Additional campaign elements for use on other digital and experiential platforms will be produced following the “Let There be Light” theme, Cook said.

Watch the new commercial on YouTube at: Baylor University: Let There Be Light