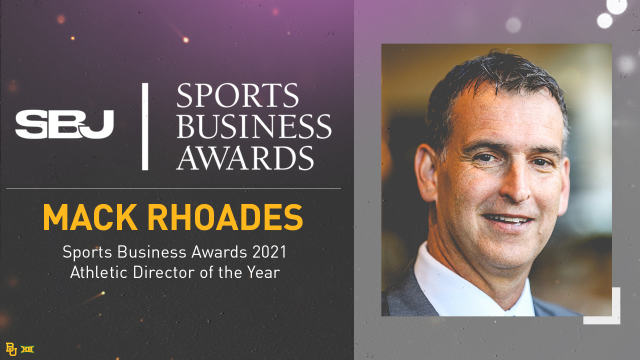 “Mack is most-deserving of this national recognition as Baylor Athletics experienced many successes both inside and outside the classroom during an unprecedented year with COVID-19,” said Baylor President Linda A. Livingstone, Ph.D. “While we certainly celebrate the wins and championships, Mack and his team have truly embraced Baylor’s unique role in intercollegiate athletics as a Christian research university and our emphasis on intentionally preparing our student-athletes in all aspects of their lives. His dedication and focus will have a lasting impact on generations of Baylor Bears.”

The SBJ Athletics Director of the Year award is given annually to a college or university athletics director who demonstrates excellence on and off the field, innovation, leadership locally and nationally, and vision. Rhoades was selected from a field of five finalists, including Alabama’s Greg Byrne, Pitt’s Heather Lyke, Notre Dame’s Jack Swarbrick and Virginia’s Carla Williams.

Baylor Athletics’ success is guided by Rhoades’ vision of “Preparing Champions for Life,” which is built on four pillars of academic achievement, athletic success, character formation and spiritual growth. Below are 2020-21 highlights for each of the four pillars: