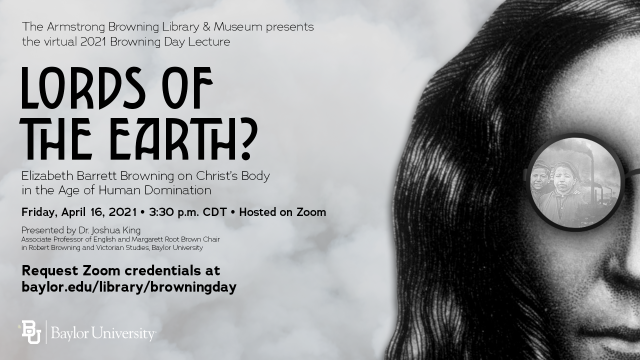 King's lecture – “Lords of the Earth? Elizabeth Barrett Browning on Christ’s Body in the Age of Human Domination” – will discuss how the Victorian poet struggled in her poetry to come to terms with the world-altering impact of the Industrial Revolution and how she envisioned a place for the Body of Christ – those participating in the work of God on earth and in the world emerging. The lecture is free and available to the public via Zoom.

“The changing Victorian world of Elizabeth Barrett Browning anticipated our own era, the Anthropocene, when human ambition and power now influence every inch of the planet and all the processes of life,” King said. “She witnessed, and experienced in her own body, the beginnings of this era through a coal-driven global economy that was altering the very atmosphere she breathed, transforming the landscapes through which she traveled by steam power and subjecting masses of her fellow citizens to inhumane labor.”

King’s Browning Day presentation adds to recent lectures and conferences that explore the intersection of literature, ecology and religion in the 19th century. His collective work will culminate in an upcoming publication tentatively titled The Body of Christ, The Body of the Earth: Nineteenth-Century Poetry, Ecology, and Christology.

This year’s Browning Day celebration will be available via Zoom using the link that will be posted to baylor.edu/library/browningday the day before the event.

“Browning Day celebrates the lives and works of poets Robert Browning and Elizabeth Barrett Browning, the two literary figures at the heart of our collections,” said Jennifer Borderud, director of Armstrong Browning Library and Museum. “I look forward to Dr. King’s lecture this year as he will be drawing attention to concerns over the treatment of our planet addressed by Elizabeth Barrett Browning in her poetry, concerns that remain relevant today.”

As a 19th-century research center, Baylor's Armstrong Browning Library is dedicated to the study of the lives and works of Victorian poets Robert and Elizabeth Barrett Browning and houses the world's largest collection of Browning material and other fine collections of rare 19th-century books, manuscripts and works of art.