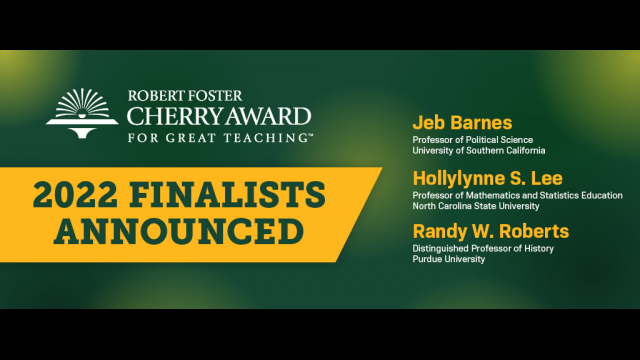 Three finalists have been selected for Baylor University's 2022 Robert Foster Cherry Award for Great Teaching. The winning professor will be announced by Baylor in spring 2022.
Tweet
March 31, 2021

WACO, Texas (March 31, 2021) – Three preeminent scholar/teachers from United States universities have been selected as finalists for Baylor University's 2022 Robert Foster Cherry Award for Great Teaching, the only national teaching award – with the single largest monetary reward of $250,000 – presented by a college or university to an individual for exceptional teaching. The winning professor will be announced by Baylor in spring 2022.

The three finalists are:

As Cherry Award finalists, each professor will receive $15,000, as well as $10,000 for their home departments to foster the development of teaching skills. Each finalist will present a series of lectures at Baylor during fall 2021 and also a Cherry Award lecture on their home campuses.

“The Cherry Committee had the challenging task of naming three finalists from an incredible field of more than 115 nominees for the 2022 Cherry Award,” said Michael W. Thompson, Ph.D., committee chair and associate dean for undergraduate programs in Baylor’s School of Engineering and Computer Science. “Learning about each nominee’s accomplishments and dedication to great teaching is both gratifying and inspirational. The three finalists for the 2022 award are excellent scholars and outstanding teachers, and we look forward to their campus visits during the fall 2021 semester.”

The Cherry Award program is designed to honor great teachers, stimulate discussion in the academy about the value of teaching and encourage departments and institutions to value their own great teachers. Individuals nominated for the award have proven records as extraordinary teachers with positive, inspiring and long-lasting effects on students, along with records of distinguished scholarship.

The award was created by Robert Foster Cherry, who earned his A.B. from Baylor in 1929. He enrolled in Baylor Law School in 1932 and passed the Texas State Bar Examination the following year. With a deep appreciation for how his life had been changed by significant teachers, he made an exceptional estate bequest to establish the Cherry Award program to recognize excellent teachers and bring them in contact with Baylor students. The first Robert Foster Cherry Award was made in 1991 and has since been awarded biennially. More about the Cherry Award is available at www.baylor.edu/cherry_awards.

Barnes has earned numerous awards for teaching and mentoring, which include being appointed to the Center for Teaching Excellence Leadership Institute; serving on faculty for the Institute for Multi-Method Research at Syracuse University’s Maxwell School of Public Policy; being named a Dornsife Distinguished Faculty Fellow in recognition for excellence in teaching; and being recognized for Outstanding Teaching in Political Science by the American Political Science Association and Pi Sigma Alpha, the National Political Science Honor Society.

Barnes studies the intersection between law, politics and public policy and mixed-method research strategies. His classes incorporate instruction on research design and methods, addressing how to frame questions, select cases, collect data, generate, measure and probe hypotheses. Barnes’ research has been supported by the National Science Foundation and Robert Woods Johnson Foundation and includes dozens of journal articles, book chapters, book reviews and four books that he has authored or coauthored, including: “How Policy Creates Politics: Rights, Courts, Litigation, and the Struggle over Injury Compensation” and “Finding Pathways: Case Selection for Studying Causal Mechanisms in Mixed-Methods Research.”

Among her many teaching awards and honors, Lee was named in 2020 as a Fellow of the American Statistical Association in recognition for excellence and advocacy in data science and statistics education and the professional development of teachers. She was honored with the UNC Board of Governors Award for Excellence in Teaching for 2019-20 and named a Fellow of the International Society for Design and Development in Education in 2019.

Lee has secured millions of dollars in external and internal grant funding, and she has committed much time and energy to creating open educational resources, offering free online courses for educators from around the world, and sharing research-based multimedia materials via Creative Commons licensing. Her scholarship and writings include more than 100 journal articles, book chapters and conference proceeding papers, four co-authored books and a co-edited book, “Scholarly Practices and Inquiry in the Preparation of Mathematics Teachers.”

Roberts has written numerous books, journal and magazine articles and book chapters. His books include: “Joe Louis: Hard Times Man;” “A Team for America: The Army-Navy Game That Rallies a Nation;” “A Line in the Sand: The Alamo in Blood and Memory” (with James S. Olson); “War Fever: Boston, Baseball and America in the Shadow of the Great War” (with Johnny Smith); and “Blood Brothers: The Fatal Friendship Between Muhammad Ali and Malcolm X” (with Johnny Smith). Roberts has also worked as a consultant and has been featured in numerous documentaries on American historical figures.