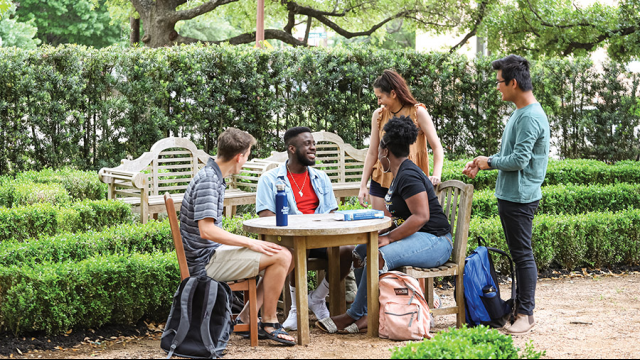 The full, unedited report includes key findings on University's historical connections to slavery and the Confederacy, as acknowledged in June 2020, and recommendations for consideration by Board of Regents

WACO, Texas (March 23, 2021) – Baylor University today released the full independent and unedited report of the 26-member Commission on Historic Campus Representations, which was charged by the Baylor Board of Regents with independently reviewing and evaluating the historical record and context of the University and its early leaders solely related to slavery and the Confederacy. The Commission's report outlines recommendations for consideration by the Board regarding communicating the complete history of the University and its evaluation of all statues, monuments, buildings and other aspects of the campus within this historical context.

The institution will continue to be known as Baylor University, while the statue of namesake Judge R.E.B. Baylor will maintain its current location on Founders Mall. The report is publicly available at www.baylor.edu/diversity/commission.

Historical Findings, Recommendations of the Commission on Historic Campus Representations

The Commission on Historic Campus Representations – comprised of 26 diverse individuals representing Baylor alumni, Regents, faculty, students and staff – was established as part of a unanimously passed resolution on racial healing and justice by the Board of the Regents on June 25, 2020, that acknowledged the University's historical connections to slavery and the Confederacy.

After officially accepting the Commission's final report at its February meeting, the Board charged the University Administration with developing a proposed action plan regarding the recommendations, all of which will be evaluated and considered thoroughly, as feasible and in accordance with existing Board policies and procedures.

"Today we find ourselves, as a Christian community and an institution of higher learning, with an important opportunity as we give consideration to the thoughtful observations and recommendations found within the final, independent report of the Commission on Historic Campus Representations," said Board Chair Mark Rountree, B.B.A. '86, M.T.A. '87, of Dallas. "I join my fellow Regents and President Linda A. Livingstone, Ph.D., in sincere appreciation for the 26-member Commission’s tireless and noble work on behalf of the University and under the extraordinary leadership of co-chairs Regent Alicia D.H. Monroe, M.D., Dean of Music Gary Mortenson, D.M.A, and Associate Athletics Director Walter Abercrombie, B.S. '82, M.S.Ed. '92. This 90-plus-page document — being the result of a prayerful, scholarly and collaborative approach over an intensive, five-month period of time — is truly a gift to Baylor University.

"As we begin our important work in response to the Commission’s report, let me state that we are proud of the name of Baylor University. As you will read in the Commission’s report, Judge Baylor was not a perfect man. As a slaveholder, he engaged in a practice we know to be sinful and abhorrent. We do not justify or downplay the evil of slavery. With our University, Judge Baylor established the foundation for hundreds of thousands of students — which now include all races and creeds — to receive a unique educational experience that combines academic excellence and a Christian commitment. We will continue to recognize Judge Baylor for the founding of Baylor University, just as we commit to presenting a more complete history of the University," Rountree said.

"The resulting actions the Board and University ultimately will take will be guided solely by our Christian mission, anchored singularly in the Gospel’s pattern for redemption and reconciliation, and directed at fostering an environment through which racial equality is inextricably linked to our mission and in which students, faculty, staff, alumni and friends of color know they are valued and loved throughout the Baylor community," Rountree added.

Over the summer and fall, the Commission carried out its work, reviewing the complete historical record and context of the University and its founders and early leaders, including historical connections to slavery and the Confederacy.

Ahead of the release of the Commission's full report, the University held three public Baylor Conversation Series events via Zoom – “Perspectives on Our History.” Similar to the historical study undertaken by the Commission, the first two panel discussions featured distinguished experts, who provided context about slavery in the United States, in Texas and among Texas Baptists during the time of Baylor’s founding in the mid-1800s. The final panel was moderated by President Livingstone and featured Chair Rountree and the Commission's co-chairs, who discussed the process, historical findings and the framework for the Commission's recommendations.

Several key historical facts that previously have not been acknowledged formed the basis for the Commission’s recommendations:

In addition to proposing a plan for documenting and communicating the complete history of Baylor, the Commission was charged with evaluating all statues, monuments, buildings and other aspects of campus in reference to the original intentions behind their physical location, placement and naming and provide observations for consideration. The Commission's recommendations on many of the historic representations provide multiple options for resolving the University's connection to slavery and the lack of historical context or narrative to tell the complete history of Baylor.

In developing its recommendations, the Commission was guided by these principles:

The major themes arising from the Commission's recommendations include:

"The Commission’s assessments and recommendations are grounded in the belief that racism in all its forms is inconsistent with the teachings of Jesus Christ and is therefore also inconsistent with Baylor’s Christian mission," the report states. "Additionally, the group’s recommendations are intended to provide possibilities for taking significant actions, in a spirit of humility and with a goal of healing, that will create a physical environment on campus that tells the complete Baylor story, thereby advancing the cause of racial justice and creating a lasting legacy for future generations of Baylor Bears."

"I am deeply grateful for the sacred work of the Commission, whose members considered and embraced Baylor’s Christian mission while also taking great care and concern for the University’s history as they discerned recommendations about how best to communicate and reflect the complete history of Baylor University," President Livingstone said. "We believe that by forthrightly and fully addressing Baylor’s history, our continued journey of redemption and reconciliation will lead to a season of renewal and new beginnings on our campus as we take measures to address all historical aspects of the Baylor story and celebrate the value of all members of the Baylor Family in fulfillment of our Christian mission and in keeping with our Christian witness."

Baylor also announced today plans to erect statues in recognition of trailblazing graduates Rev. Robert Gilbert, B.A. ’67, and Mrs. Barbara Walker, B.A. ’67, in front of Tidwell Bible Building, where they, like today's students, took classes in history and religion as part of Baylor’s undergraduate core curriculum and also walked along the street where the Judge Baylor statue is located. The statues of Gilbert and Walker will commemorate the two friends’ mutual standing as Baylor’s first Black graduates who helped integrate Baylor.

"The late Rev. Gilbert and Barbara Walker are deserving of additional and more prominent recognition for not only their place in Baylor University’s history, but also their lasting impact on who we are today and who we chose to be as an institution of higher learning in the future," President Livingstone said. "The presence of two new statues honoring people of color on the Baylor campus will contribute to a more complete telling of the Baylor story and honors all who contributed to the institution’s success across the ages. The new outdoor statues also will create a highly visible, welcoming and affirming message that all members of the Baylor Family are valued in fulfillment of the University’s Christian mission."

In both their personal lives and professional callings, Gilbert and Walker exemplify the Baylor spirit of leadership and service.

In 2007, Rev. Gilbert was honored with a memorial lamppost outside the Bill Daniel Student Center, and in 2013, Baylor created the Robert Gilbert Outstanding Advocate Award to be given annually to one student who exhibits a true passion for and awareness of a social justice issue. In 2017, Baylor recognized Walker with the Medal of Service for Contributions to Christian Ministry, which is awarded to individuals for dedication to advancing their chosen fields and making significant impact in our world.

The University expects to review sculptors and initiate design proposals in early summer and select a final sculptor in early fall.