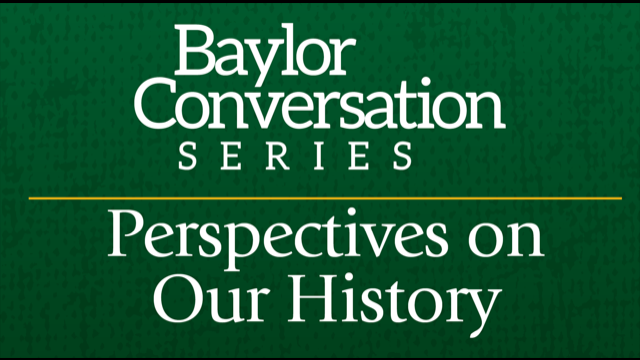 Events will focus on slavery in the United States, Texas and among Texas Baptists, and historical findings, recommendations of the Commission on Historic Campus Representations

WACO, Texas (Feb. 25, 2021) – Ahead of the public release of the full, independent report of the Commission on Historic Campus Representations by the end of March, Baylor University will hold three "Baylor Conversation Series" events on March 2, March 9 and March 16.

Moderated by Ronald Angelo Johnson, Ph.D., The Ralph and Bessie Mae Lynn Chair of History in the Department of History at Baylor, each event of the "Baylor Conversation Series: Perspectives on Our History" will include panelists from universities in Texas and across the country and other experts to discuss slavery in the United States, slavery in Texas and among Texas Baptists, and the historical findings of the Commission and the framework for the recommendations.

The first event, "Perspectives on Our History: Slavery in America," will be held from 6:30 to 8 p.m. CT Tuesday, March 2, on Zoom. Johnson will be joined by a panel of experts who will provide insight into the history of slavery in America. The panelists include:

"This Baylor Conversation Series event is the first step in understanding the historical context of Baylor’s founding and early years and will provide a foundation for two additional conversations – one on slavery in Texas and in Baptist life, and another on slavery around the time of Baylor’s founding in 1845," President Linda A. Livingstone, Ph.D., said. "This historical study is similar to one undertaken by members of Baylor’s Commission on Historic Campus Representations as part of a commitment to forthrightly and fully present Baylor’s history and to foster an environment of racial equality in which all students, faculty, staff, alumni and friends of Baylor know they are valued and loved throughout the reaches of the Baylor Family."

On Tuesday, March 9, from 6:30 to 8 p.m. CT, again via Zoom, Johnson will moderate "Perspectives on Our History: Slavery in Texas and Among Texas Baptists" with panelists:

President Livingstone will host the third and final Conversation Series event on Tuesday, March 16, from 6:30 to 7:30 p.m. CT via Zoom, which will outline the work of the Commission on Campus Historic Representations as it relates to Baylor’s history and the framework for the Commission’s recommendations. The Commission’s report will be released publicly in its entirety by the end of March.

The Commission on Historic Campus Representations – comprised of individuals representing Baylor alumni, Regents, faculty, students and staff – was established as part of a unanimously passed resolution by the Board of the Regents on June 25, 2020, that acknowledged the University's historical connections to slavery and the Confederacy. The Commission presented the Commission’s final report to the Chair of the Board of Regents and University President on Dec. 20, 2020.

At its February meeting, the Baylor Board of Regents officially accepted the final report, passing a resolution that expressed its gratitude to the 26 members of the Commission and setting a path forward for the University Administration to develop an action plan of the Commission's recommendations for Board consideration.