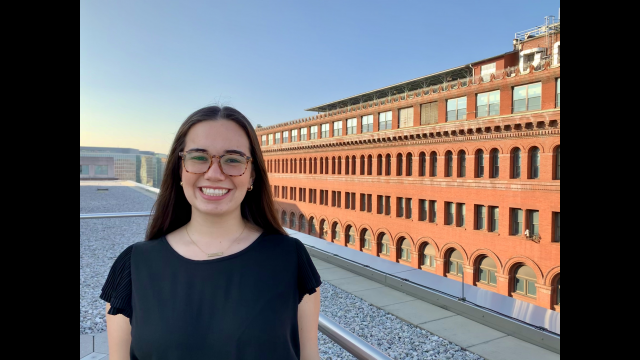 Fulton, who is from Oronoco, Minnesota, is the second Baylor student to receive the prestigious award, funded by the U.S. Department of State. She is a Baylor Business Fellow with majors in economics, finance and Arabic and Middle East studies.

The Rangel Fellowship funds two years of graduate study, two internships — one in Congress, one at an embassy or consulate abroad — and a variety of mentoring and professional development opportunities that prepare Rangel Fellows to join the Foreign Service upon graduation.

Fulton found out that she was selected for the award while on a weekend hiking trip with friends from the Baylor in Washington Program.

“They were thrilled to celebrate with me — a testament to the strong community environment Baylor fosters,” she said.

“I am honored to be selected for the Charles B. Rangel Fellowship because of its mission to build a more diverse and dynamic diplomatic corps," she said. "The Foreign Service pays a unique role in filling the gap between U.S. foreign policy decision-makers and the individuals personally affected by U.S. foreign decisions. The Rangel Fellowship will provide the opportunity to quickly begin this dream career.”

Fulton said her interest in foreign service sprang naturally from her background.

“My mother immigrated to the United States from Laos and later met my dad while they both worked for the Peace Corps in Niger, so international affairs were always on my mind growing up,” she said. “I started studying Arabic in high school, which initially sparked my interest in the Department of State and the Foreign Service. Throughout college, studying abroad in Morocco, interning on the Institute for the Study of War's Iraq Team and working as a tutor for a Kurdish-Iraqi refugee, I have learned about the importance of understanding the individual perspectives to promote more empathetic U.S. foreign policy decisions, especially in the Arab world.”

Through the State Department’s United States Foreign Service Internship Program, Fulton also interned for the Bureau of Economic and Business Affairs in Washington, D.C., and the United States Embassy in Lisbon, Portugal. Those experiences solidified her desire to work for the Department of State, she said.

“These programs provided invaluable preparation for the Rangel Fellowship application and final assessment,” she said. “Through Model UN and Model Arab League, I learned how to translate my theoretical academic knowledge on economic and political topics into policy proposals.”

Fulton also is involved in the Alexander Hamilton Society, a foreign-policy discussion group, and the Washington, D.C., Student Advisory Committee.

“One of the best parts of my Baylor experience, which has prepared me well for the Rangel Fellowship, is Baylor's emphasis on multidisciplinary education,” she said. “While most of my experiences have focused on foreign policy and Arabic, I have also had the opportunity to participate in a finance book club through the Business Fellows program, work as a finance tutor and help with economic research.

Developing these quantitative analysis skills has prepared me for the Rangel Fellowship and Foreign Service.”

“Sophia is a perfect fit for this award, and we are thrilled that the selection committee saw in her what we at Baylor have long seen: she is brilliant, experienced and possesses the poise and temperament that will make her a successful Foreign Service Officer working on behalf of the diplomatic interests of the United States,” said Andrew Hogue, Ph.D., associate dean for engaged learning in Baylor’s College of Arts & Sciences. “We think of the Rangel Fellowship as a ‘golden ticket.’ Having won this award, Sophia is on the fast track to her dream of working in the Foreign Service.

“Yet again, this is an indication that transdisciplinary partnerships are a great service to Baylor students,” Hogue said. “We feel incredibly fortunate to have Baylor students win two years in a row. It was especially gratifying to have last year’s winner, Gabbi Mucerino, help us with Sophia’s final mock interview — a sign that our alums remain invested in the success of those who follow. This is a great moment for Baylor.”

Charles North, Ph.D., associate professor and chair of economics in Hankamer School of Business and the associate director of Baylor Business Fellows, who has served as Fulton’s advisor since she joined the Baylor Business Fellows program, said her education at Baylor has prepared her well for a career in foreign service, thanks to her in-depth exposure to the politics, language, culture and commerce of the Middle East.

“Adding in her study-abroad experience and her internships has only made her even more prepared,” North said. “With the Rangel, she will be able to continue her studies at the graduate level, and I am confident she will excel.”

“I can attest she’s deserving of this tremendous honor,” Flavin said. “Students like Sophia are truly rare. Sophia is both incredibly intelligent and tirelessly hardworking. She is an incredible mentor to younger students, giving generously of her time and energy to help other students be the best researchers they can be. She makes every team she is part of better, both due to her own talents but also through her leadership that inspires teammates to strive for their best as well.”